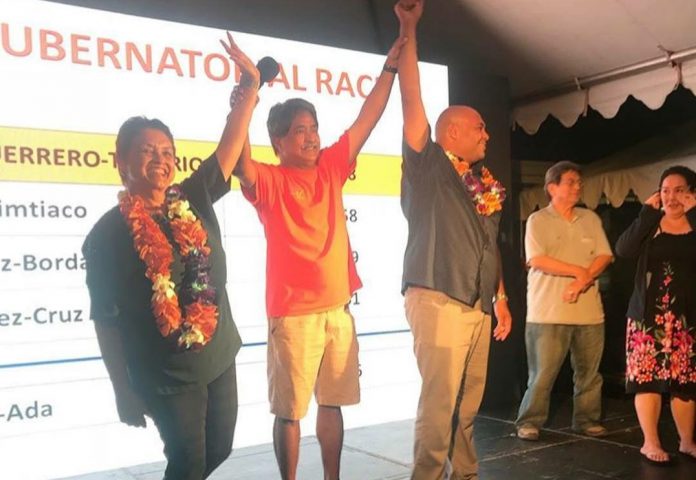 Guam – Gubernatorial candidates Lou Leon Guerrero and Joshua Tenorio have clinched the nomination for the Democratic Party, based on unofficial final results of Saturday’s primary election.

But this status could change with an anticipated recount of the votes cast, as the margin between the Lou and Josh team and number two finishers–Senator Frank Aguon, Jr. and Alicia Limtiaco–is one percent.

Total votes cast for Leon Guerrero-Tenorio: 8,218. For Aguon-Limtiaco: 7,958. A difference of just 260 votes. And preliminary figures don’t even include absentee or provisional ballots yet.

The Attorney General’s race puts Leevin Camacho on top by a wide margin, garnering nearly double what the second place finisher received. A total of 14,284 votes were cast for Camacho; 7,915 for Doug Moylan; and 7,260 for Gary Gumataotao. Camacho and Moylan now advance to the general election.

Speaker BJ Cruz finished in a landslide first in the Public Auditor’s race with 14,046 votes to Doreen Crisostomo 9,130 votes. Acting Public Auditor Yukari Hechanova received 6,303. The Public Auditor election is a special election which was held to coincide with the primary election. The top place finisher wins in this election.

Perhaps the most upsetting of the weekend’s election outcomes is the Congressional race with Sen. Michael San Nicolas unseating his opponent, incumbent Congresswoman Madeleine Bordallo in the Democratic primary. Bordallo has not lost an election since 1990 in her bid for governor with running mate Ping Duenas. She served as a five-term senator and was the first female lieutenant governor of Guam from 1995 to 2003. She was then elected to the House of Representatives in 2003 and has been Guam’s sole non-voting delegate to the lower house since, winning every election.

On Saturday, she lost to San Nicolas who received 12,456 votes. Bordallo finished with 11,635 votes.

The legislative race narrows down the top 15 vote getters on either party. The results are as follows:

Again, these results as unofficial until certified by the Guam Election Commission.

Concession statements were also issued by some of the losing candidates:

“Words aren’t enough to tell our campaign, volunteers, and voters just how much we love them and are grateful for their confidence in our movement. Truly, our hearts are full of love, not just for the people who voted for us, but for everyone who voted and every citizen of Guam – the only home I’ve ever known.

Dave and I did not prevail, but that doesn’t mean what we fought for shouldn’t prevail. This was always bigger than Dave and I, or anyone who makes it to office. Had we been elected, we would have been instruments of a movement to end corruption, raise an economic revolution, and modernize the government. If this is something we truly believe in, then as private citizens, we all can be those instruments by challenging authority peacefully, speaking up for the voiceless, standing up for what is right,  and condemning what is wrong, especially when it isn’t popular to do so.

My wife and I are content knowing I’ll be rejoining the private sector after eight years of public service. We have a young family to raise. My daughter, who is 22 now, was our ray of sunshine in this campaign. She worked so hard and made us so proud. It’s our turn to support her in her dreams. Our two young sons get to have their dad back.

Democracy has this inherent wisdom that is driven by the majority. This wisdom causes and is caused by the will of the majority to set a path exactly as it needs to be set. Difficult as it can be to accept, there is a design by God and His universe that I do not question. This may be something that is hard to see from day to day, but in the reading of history, we will see and appreciate better why God places people in the right places at the right times for the betterment of humanity. From now until that time when we may look back at this election from the prism of history, our day to day duty is to act with kindness, to seek the truth in every decision we make, to love unconditionally, and to judge none when we falter in this charge, except for the government we elect.

I humbly ask our supporters and voters to carry on one of the core values of our movement, which is to take care of each other. We now are family, and if there’s anything I would rather not lose between the election and their new kinship with us, it is them, our RC18 Family.

Dave and I congratulate the unofficial victors of the primary election, the Leon Guerrero – Tenorio team and ask all voters to elect a majority of Democrats to the Legislature and to choose candidates who pledge to be free thinkers and who vow not to conduct the business of corporate corruption behind closed doors at the expense of the public interest.

Finally, we thank the reporters, the talk jockeys, and the editors of every news organization, who made democracy that much more powerful by keeping the electorate informed and giving voters the chance to challenge their government, express their opinion, share ideas, and contribute to society in ways that many times we take for granted. We live in a beautiful paradise at an exciting time for our children and for theirs. Today is a new day to do good for others. Tomorrow is the day we get to feel good about that. So, raise it all to God, love each other, and make today the best it can be.

Democracy is alive and well when we have hard-fought campaigns between competing ideas or plans to accomplish those ideas. Once the campaigning is over, however, one side is victorious, and we wholeheartedly respect the choice of our people and allow those elected to govern on the foundation of their vision.

The Gutierrez Bordallo team congratulates Lou Leon Guerrero and Joshua Tenorio on their victory. We trust their team will be committed to ensuring our campaign message, in spirit and in deed, within the Democratic platform going forward, including bringing Guam back to the very best of Guam again.

Lastly, and most importantly, we thank our loyal and devoted supporters for their undying love and commitment, as we hold fast to our goal of helping the people of Guam in whatever capacity we can, because in the end, our true purpose is them.

“My name and memory I leave to our people’s charitable speeches, to our Micronesian brothers and sisters who are an intrinsic part of who we are, my kapatids, the birthplace of my great-grandfather FredericoGutierrez, born in Binondo, Manila, in 1825, and to the next generation. I have given my life to serve you; to better the lives of us all. We did not make it during this election, but it’s so much more than that. It’s not over. I’m not done. For the rest of my life I will continue to serve our people, and I will support anyone who is willing to do the same.” –  Carl T.C. Gutierrez

“The traditions of the Bordallo and Underwood families from my grandfather, Baltazar J. Bordallo and great-grandfather, James Holland Underwood, have always been rooted in service to the people of Guam. I have been blessed with a loving family, my mother Annie, my dad, Fred, and siblings who  encourage me to make a difference in the lives of those around me, and confront any challenge head on. I will continue to serve our island because the resilience of our people has always been the driving force for me to move forward.” – Fred Bordallo, Jr.

May God bless our people of Guam, watch over us as we continue our journey to select the next team of leadership, and keep us in his Divine embrace as we focus on the future of this beautiful island we all call home.