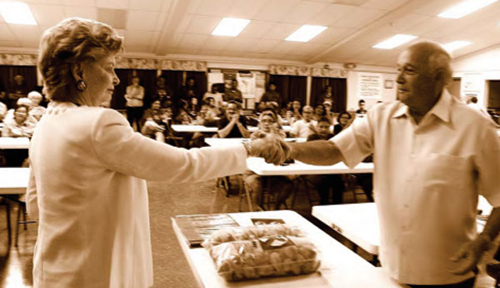 Guam – The high-level appointments follow her well-known practice of employing skilled and experienced people to help her map and achieve goals. The former president, chair and CEO who doubled  the assets of her family’s Bank of Guam to $2 billion inside a dozen years on the job is now the newly sworn Democratic Governor of Guam, and she’s apparently not about to abandon a habit that has served her priorities so well.

Gov. Lou Leon Guerrero has just hired the island’s last Democratic governor and lieutenant governor, Carl Gutierrez and Madeleine Bordallo, to serve at her pleasure. The Gutierrez- Bordallo Administration led the island through tragedy and triumph from 1995 to 2003, during back-to-back terms marked by a combination of deliberative planning and execution and flexible prioritization that helped the island recover from the aftereffects of an 8.1 magnitude 1993 earthquake and a devastating 1997 super typhoon, and crisis-manage an airline accident that killed 228. Wasting no time, Leon Guerrero made the announcement on Friday, the final day of her first week in office.

In demonstration of the notion that politics is the art of the possible, the cabinet-level appointments come two decades after Leon Guerrero campaigned against Gutierrez-Bordallo in a heated three-way Democratic primary in 1998 as running mate to then-Sen. Tom Ada. The bestowals also come a little more than four months after she finally defeated the reincarnation of the Gutierrez-Bordallo brand in the primaries that saw Gutierrez team up with Madeleine’s nephew, former Guam Chief of Police Fred Bordallo. Carl Gutierrez and Madeleine Bordallo both endorsed Lou Leon Guerrero and her running mate, Joshua Tenorio, after last November’s primary election.

Former Congresswoman Bordallo is just off eight consecutive terms representing Guam as a nonvoting delegate to the House of Representatives. Gutierrez has remained a major force in Guam politics and elections since he left Adelup 16 years ago.

Read the official press release from the Office of the Governor, below.

“Former Governor Gutierrez and former Congresswoman Bordallo are points of light in our island’s history of public service and I am humbled by their willingness to serve in our administration. Their combined years of public service, love of island, and fierce loyalty in fighting for the working class is immeasurable and I look forward to working with them,” said Governor-Elect Leon Guerrero. ”

“Having served in the Gutierrez-Bordallo administration, I am honored to once again have the opportunity to work with former Governor Gutierrez and former Congresswoman Bordallo. Both have been great role models in my life and I look forward to demonstrating the same commitment to public service as we usher the return of Democratic leadership to our island,” said Lieutenant Governor Tenorio.

The appointees and respective positions are as follows:

Former Governor Carl Gutierrez was the 6th Governor of Guam, serving two four-year terms from January 2, 1995 to January 6, 2003. He was first elected as Senator in 1972 and served a total of nine terms. He served as Speaker of the 17th and 18th Guam Legislatures, and he was the Ways and Means Chairman for three terms. He was the Democratic State Party Chairman for 2 years. He was President of the First Constitutional Convention in 1977. He served as an advisor to Palau’s Constitutional Convention in 1979 and was made an honorary citizen of the Republic of Palau. Gutierrez was the founder of the Council of Micronesian Chief Executives and was the Chairman of the Council twice. He also served as president of the Association of Pacific Island Legislatures. From 1988-89, Gutierrez was the vice-president of the Guam Visitors Bureau (GVB) and chairman of GVB’s International Marketing Committee. As Governor, he brought First Lady Hillary Clinton to Guam in 1995 and President Bill Clinton in November 1998. Governor Gutierrez was a member of the National Finance Committee for the Clinton-Gore Re-election campaign in 1996. He holds an honorary Doctorate of Law from the University of Guam.

Former Congresswoman Madeleine Bordallo served as Guam’s Delegate to the United States House of Representatives from 2003 to 2019 and was the first woman elected to serve in that position. Bordallo was the first female candidate for Governor of Guam and the first female Democrat elected to the Legislature of Guam. As the wife of former Governor Ricky Bordallo, she was also the First Lady of Guam from 1975 to 1979 and from 1983 to 1987. She served five terms as a senator from 1981 to 1982 and again from 1986 to 1994. In 1994, she ran with Carl Gutierrez as his lieutenant governor candidate and won, serving from 1995 to 2002, as the first woman in Guam’s history to hold this position. Former Congresswoman Bordallo was the founder of numerous non-profit and civic organizations and continues to be engaged with its activities. Prior to assuming this role, she departed the U.S. Congress as the island’s longest serving Delegate and as a Ranking Member of the House Armed Services Committee. She was also a member of numerous caucuses and organizations in Washington, D.C.