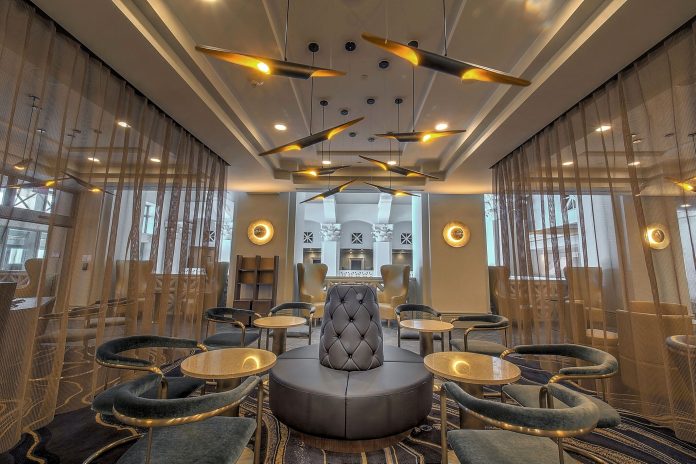 RIM Architects did the interior architecture for the completely redesigned and renovated floor.

Guam – Leopalace Resort is upping their game in the luxury hotel arena with the unveiling of their completely renovated and redesigned Medallion Floor.

For many people on Guam, Leopalace Resort can be a weekend family staycation—away from the hustle and bustle of the Tumon strip. Located in the rolling hills of Manenggon, the sprawling resort has its own golf course too. But the hotel is now bringing a new edge of premium service, introducing a new level of luxury and class—The Medallion Floor.

The entire floor was almost entirely gutted out and redesigned from scratch with a new design inspired by a modern European look. It’s also modeled after the launch of Leopalace’s new logo, which is a gold coin. The interior architecture was designed by RIM Architects.

“all of these things … this pattern, they all play off of the new logo which is a gold coin and the gold coin is emphasized here on the fifth floor for the medallion level. So this is the highest level of service here,” said Christine Wolke of RIM Architects.

The medallion floor is decorated with gold motifs throughout and speaks of elegance and luxury. It also has a touch of Guam’s culture and history seen throughout. In addition to the redesigned rooms, an executive lounge was also unveiled exclusive to guests staying on the Medallion floor. The executive lounge has a unique history to it too.

“This used to be a storage room,” explained Toshiro Doi, general manager of Leopalace Resort. “[And then we] turned the storage room into the lounge. But that’s not good enough because we have to create ‘wow.'”

Leopalace expanded its dining area in the executive lounge by creating a suspended bridge connecting two buildings. It overlooks the hotel property’s sparkling lake and guests eat indoors of course while they marvel at breathtaking views through a floor to ceiling glass.

Room rates on Leopalace’s medallion floor start at $460 a night for the medallion room, $680 for the executive suite, $1,600 for the governor suite and $3,500 for the presidential suite.

You can find out more about the Medallion Floor at www.leopalaceresortguam.com