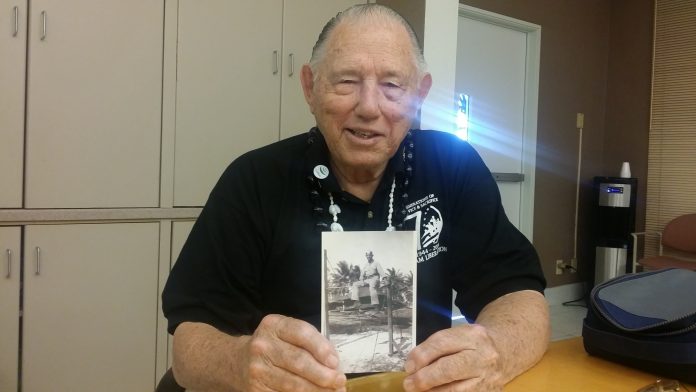 In honor of Liberation Day, Guam Visitors Bureau hosts the visit of one of the oldest Guam Liberators to live.

Pacific News Center spoke with 89 year-old World War 2 liberator, Gene Bell, this morning as he shared his memories from serving on Guam in the 81 Millimeter Mortar platoon; 3rd Battalion, 3rd Marine unit.  While he may be 89, Bell sat lively and shared charming stories of intrigue that would often end in amazement and laughter. He told stories that began 72 years ago when he was only 17 years old in the jungle of Guam fighting for liberty.  A black and white photo of Bell in the middle of the jungle, sitting on a gymnastics bar built by a fellow Marine, laid on the table as he moved his hands in motion of cutting through the jungle.  The veteran expressed how he used a machete to cut through the thick jungle during combat and smiled when describing his appreciation for natural coconut juice in times of when fresh foods were limited. It was almost as if he could see it right in front of his very eyes, explaining the way that the island was “completely demolished by the enemy” from the ocean to the air strip.  He went on to explain how he and his fellow Marines set up roadblocks in Agana at the intersection of a major road leading to Talafofo in order to protect the island.  They moved northbound until they had completed their mission in securing the island.

World War II Guam Liberator, Gene Bell went on from Guam to serve at Iwo Jima.  After Iwo Jima, he was back in the states when the news of USA’s victory was announced.  He shared that VJ Day was a big celebration. “By the end of it all I had on was pants.  They people went crazy, taking everything, hats, shirt, everything from me.  They were so excited. We had a big celebration.” he adds.

Bell is a board member of the Iwo Jima Association of America.  He has returned to the island many times since his first return visit in 1970.  In fact, he has a love for all the islands so much that he and his late wife had once financially adopted girls from Palau and Yap by bringing them to the states and helping fund their education.

While the number of his fellow Guam liberators who are still living is decreasing, he proudly returns to the island each year.   He especially enjoys watching the floats in the parade and looks forward to it this year.  This years liberation day parade will include paying respect to Bell and fellow Guam Liberators.  However, he said that is the only one who has returned to Guam from his group.

PNC thanks all our veterans for their service and welcomes Guam Liberator Gene Bell in his visit.

To view the video feature from PNC News First play the video above to see the feature story more.