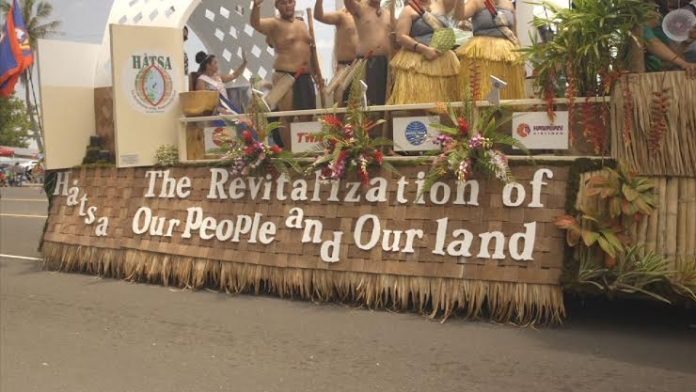 Thousands lined Marine Corps Drive as they do every year to watch the 72nd annual Liberation Day Parade.

Guam – For many Liberation Day is a day for families to get together BBQ and enjoy the parade but it’s also a day where many Guam residents display their patriotism.

Thousands lined Marine Corps Drive as they do every year to watch the 72nd annual Liberation Day Parade. But the celebration of Guam’s liberation from Japanese occupation during World WarII is more than just an excuse to party. “I’m always amazed at how after this many years 7 plus years that we are still so loyal so dedicated,” said Congresswoman Madeleine Bordallo.

Acting Governor Lt Governor Ray Tenorio says it’s also about honoring those in the armed services. “Appreciate your military armed service members because they are the ones who keep our country safe we have many of our family out there defending our liberty every single day,” said Tenorio.

The 3rd Marine Division the same marine division that helped to liberate Guam brought it’s color guard to the island to participate in the liberation day parade. PNC asked Sgt. Major Vincent Santiago, “As a CHamoru who grew up here on Guam also as a marine what does liberation day mean to you?” Santiago responded saying “It means a lot of things but pride just being from Guam and then celebrating it as a marine is very very important not only for me but for everyone else that I represent who wears a uniform who took the opportunity to serve our country and represent our island so it may be me standing here today but I know damn well that I represent everyone else that wears a uniform.”

Commanding General of the 3rd Marine Division two star Major General Rich Simcock told PNC, “Guamanians and the people that live here some of the most patriotic people that I’ve ever been around and it’s always a pleasure to come here I always enjoy myself and I enjoy spending time with the Guamanians here.” Major General Simcock added ”The only thing I would say is just how important Guam is to military and our forward deployed forces, critically important it was important 72 years ago during WWII and it’s just as important now and we appreciate the support that we get from everybody here in Guam.”