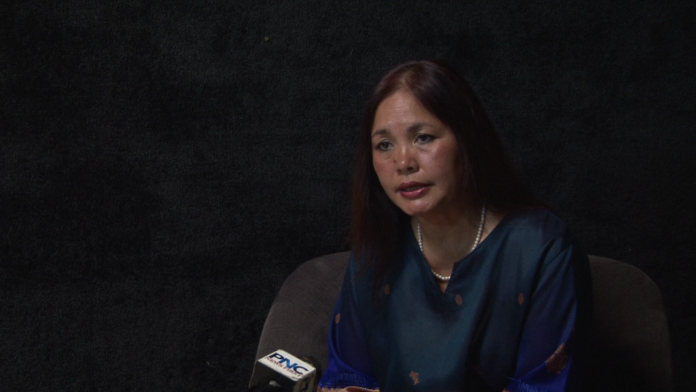 Guam – It’s not that she refused to pursue charges against police officers in the Blue House human trafficking case, former U.S. Attorney Alicia Limtiaco and now a lt. governor candidate says she was bound by ethical responsibilities from speaking about the case.

At least that’s how she characterized her response to political opponent Fred Bordallo’s claims that she dropped the ball in the case–by dodging many of our questions.

It started out as an allegation from Troy Torres, the former communications director for Governor Calvo. Torres has targeted every gubernatorial camp except for his former bosses on the Rodriguez-Cruz ticket and the Aguon-Limtiaco team since spending one night in jail on drug charges.

But Bordallo quickly shifted the focus of these accusations over to yet another political opponent, implying Limtiaco dropped the ball in going after police officers involved in the Blue House prostitution ring.

So we sat down with Limtiaco, now the running mate of gubernatorial candidate Sen. Frank Aguon Jr.

“Fred Bordallo certainly is entitled to his own views and recollection of events at that time and I respect that those are his views. I also know, however, that as law enforcement, that we, in any impending investigation or case, would not ever comment on those pending matters,” Limtiaco said.

Her answer is in direct response to Bordallo’s claims that Limtiaco refused to answer him when he asked whether she planned to pursue charges against Officer David Manila or others on the police force while the federal trial was still ongoing.

PNC: “First, is that true, and second was the reason for not responding, if it is true, because you were not able to comment on [the case] because of your position as the U.S. attorney?”

“Again I would stress that with any pending investigation or matter, it would not be appropriate or proper for law enforcement to really comment in any way,” she replied.

But the case is long over. In fact, federal charges against Manila and other police officers were never pursued in federal court. The men in blue instead were tried and convicted in a local court of law. Both cases are now closed.

“Regardless of the fact that the case has since been closed, I would be, as the former U.S. attorney, as a former attorney general, really, in any case bound by my ethical responsibilities and duties not to comment,” Limtiaco said.

No matter how hard PNC tried to pry answers out of the political candidate, Limtiaco maintained her legal posture, responding like a trained attorney.

PNC: “Was there any kind of immunity or deal given to [the police officers] in exchange for their testimony that they would not be prosecuted or face any kind of criminal charges?”

“Again, given the circumstances of what occurred at that time and my position, my formal responsibilities and duties, I would not be able to comment,” she replied.