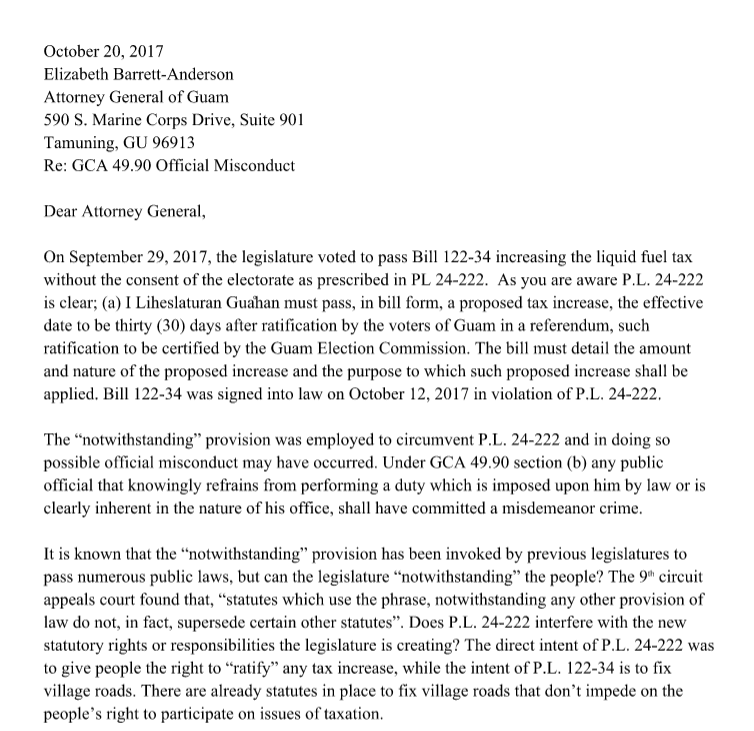 Concerned citizen Andry Baynum is asking for the AG to take action against Bill 122’s authors Republican Senator Tommy Morrison and Speaker BJ Cruz as well as to suspend the public law from going into effect until it is approved or disapproved in the next general elections.

Guam – Bill 122, a measure signed into law just last week has already garnered criticism from a concerned citizen who is now seeking the Attorney General’s input on what he believes is a “provision used to egregiously impede the direct participation of the citizenry in issues related to taxation.”

Bill 122 seeks to incrementally increase the liquid fuel tax for the purpose of funding village road repair or construction projects.

However, according to concerned citizen Andry Baynum, the word “notwithstanding” –a seemingly small and often overlooked phrase at the beginning of legislation was left out of the public law.

In essence, the phrase means that a piece of legislation can be used without impeding other laws.

But what happens when a bill doesn’t include the phrase “notwithstanding”? Is that grounds for debate? Baynum believes so.

The phrase was not included in the passed bill. This not only drew strong criticism from  Baynum, but also prompted him to draft a letter to Attorney General Elizabeth-Barrett Anderson.

He adds that the bill was passed without the consent of the electorate. Baynum argues that the notwithstanding provision was simply employed to circumvent the ability for voters to ratify the proposed tax increase.

Subsequently, Baynum is asking for the AG to take action against the bill’s authors Republican Senator Tommy Morrison and Speaker BJ Cruz as well as to suspend the public law from going into effect until it is approved or disapproved in the next general elections.

Although the AG’s Office issues opinions and legal memos to government agencies, board commissions, and the like, it’s unclear if the AG will entertain solicitation from a private citizen.

“The constituent’s request for the Attorney General to suspend action on P.L. 34-44 raises serious questions concerning the legislature’s ability to approve legislation – and on whether any legislature has the power to limit future legislatures from passing certain legislation.

Moreover, the constituent’s argument against the use of the “notwithstanding” provision in P.L. 34-44 seems interesting as the very statute he cites (Section 16311 of 3GCA) also uses the same provision: “§ 16311. Referendum on Tax Increases Required. Notwithstanding any other provision of law, no increase in real property tax, liquid fuel tax, business privilege tax or any locally enacted and administered tax on Guam shall go into effect without …”

Conversely, Speaker BJ Cruz writes: “Every senator is individually accountable to the citizens we serve. I voted against the substitute version of Bill 122-34 because I believe we must end the practice of raising taxes without the consent of the people.”