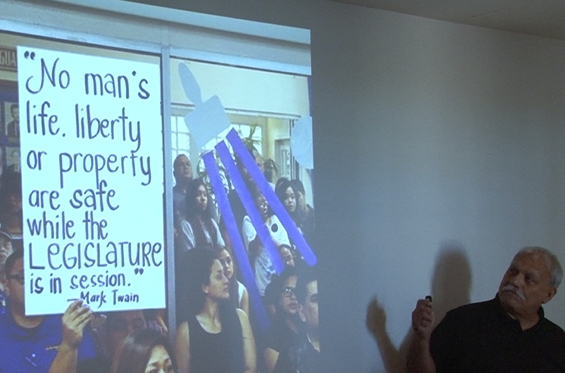 Guam – The group “Citizens for Public Accountability” has a goal before the November elections: get two voter initiatives on the ballot.

One is to roll back raises for the Governor, Lt. Governor and the senators.

Spokesperson Ken Leon Guerrero says, “The first voter initiative is brought about by the senators themselves. They failed numerous attempts to pay attention to what the public was demanding and roll-backed their compensation to the pre-2014 level.”
According to Leon Guerrero, they’re also proposing that all future pay raises for elected officials be determined by a public referendum. The second initiative is to switch to a part-time Legislature. He explains, “This would return to the concept of the founding fathers had of the citizen legislature, instead of professional politicians because if you look at our politicians, everything we see happening now is geared to creating a sense of urgency and compelling reason why they should stay in office.”
Leon Guerrero says a part-time Legislature entails only holding two sessions per year, calling for a special session if needed, and job protection guarantees. Now how exactly is the Citizens for Public Accountability going to put these two voter initiatives on the ballot?
“We’re going through the first stage right now which is having ten public meetings, six in the larger villages. After we have ten meetings, we take our paperwork to Guam Election Commission and then they certify it, give it a title and then we’ll be able to get signatures,” says Leon Guerrero.
The Citizens for Public Accountability would need to garnish 4600 signatures, but Leon Guerrero doesn’t think it’ll be a problem.
“When you talk to people in the community, I have not run into a single person who supported the pay raises other than the senators themselves. So notable names…everybody on Guam except 17 people,” explains Leon Guerrero.
After getting at least 4600 signatures, the Guam Election Commission would then need to verify and certify the documents before including the initiatives on the ballot. Leon Guerrero pointed out that if this last attempt to rollback raises doesn’t work out, it might eventually lead to this: “We will be number 1 in something finally. We will overtake Puerto Rico on debt per capita and we will do it in a year because of all the proposals our senators and governor have lined up which will make us further into debt.”
For more information about Citizens for Public Accountability, e-mail c4paguam@gmail.com