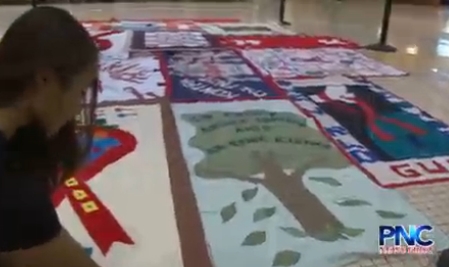 In an effort to spread awareness about HIV and AIDS, a team made up of several organizations held the World AIDS Day outreach at Agana Shopping Center over the weekend.

Guam – World AIDS Day is celebrated on December 1st nationwide, but since Guam is where America’s day begins, the team decided to organize an expo this past weekend with the theme: “The Time to Act is Now!”. The West Care Pacific Islands, Guam Alternative Lifestyle Association, Guahan Project and the Department of Public Health and Social Services held an expo with an AIDS Quilt Exhibit, a Wall of Hope, entertainment, informational materials and more. WestCare Pacific Islands Board Member Carl Gumataotao says he wants to educate the younger generation about STD prevention.
He explains, “I don’t think people realize that since 1985, there have been 253 cases of HIV on Guam. Today, there are 67 people living with HIV that are on Guam. With the technology and modern medicine, they are living complete life spans compared to a normal people, you can’t even tell.”
If you missed out on the expo this weekend, don’t worry. Tomorrow, there will be a World AIDS Day wave at 5 pm followed by a candlelight vigil at the WestCare Pacific Islands Office across Tamuning Elementary School. For more information, call the Guam AIDS hotline at 734-AIDS or 2437.