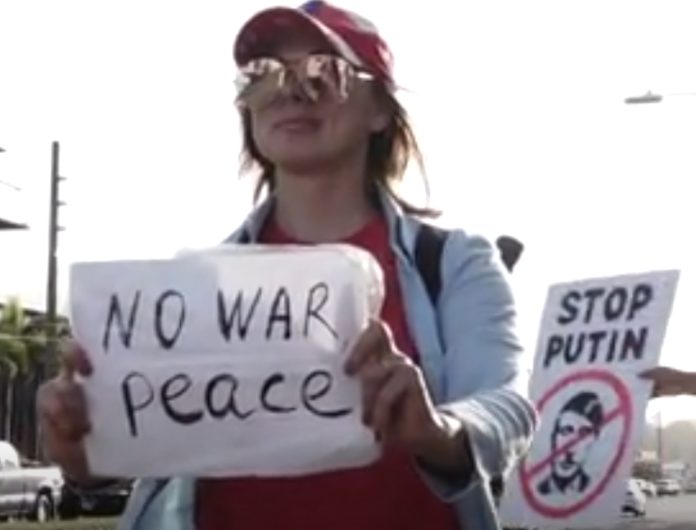 Earlier this week, Guam’s Russian Community came together in solidarity to show their support of Ukraine, in the ever changing situation of Russia’s invasion of said country.

As the situation with Ukraine continues to evolve many people are fleeing their homes , saying their final goodbyes to their loved ones , and living in constant fear.

According to ABC News, The UN refugee agency has said that 1 million people have fled Ukraine since Russia’s invasion less than a week ago

On Sunday, Russian President Vladimir Putin put nuclear missiles on high alert.
However, the New York Times reports that President Biden has agreed to talk to Putin without conditions, despite the alert change for nuclear weapons.

Satellite images have shown a 40-mile-long Russian military convoy approaching Ukraine’s capital of Kyiv on Tuesday while Russian forces carry out a deadly attack on the city’s main TV tower.

They have also advanced on the ground, while Ukraine’s second-largest city, Kharkiv, was hit by intense shelling.

The Pentagon’s press secretary said the U.S. assessment of Kherson is that the city is still contested.
Russian authorities have claimed the city is under their “complete control but Ukrainian authorities say that’s not the case.

TUESDAY, the U.N. human rights office said that at least 136 civilians had been killed by Russia’s assault, including 13 children.

AND.. Although Guam has a small Russian community, it hasn’t stopped them from showing their support against Vladimir Putin and solidarity with the Ukranians.

Western countries have removed seven Russian banks from Swift, but left access open for others.

Sanctions from the U.S. and its allies have allowed energy shipments from Russia, but even without sanctions in place, refiners have balked at buying Russian oil and banks are refusing to finance shipments of Russian commodities.

ABC news has also reported that Switzerland, which has remained neutral during World War I and World War II, has frozen all Russian assets.

In Addition to that, the United States has provided an additional 350 million dollars in military assistance to help the front lines. This package is expected to arrive within the next few days.

Yesterday, at Polish Parliament it was confirmed that the Polish border is open for all Ukrainians, even those without a valid ID Document, no covid certificates needed, no insurance, and animals are welcome.

During these difficult times it shows how resilient a nation can be and how when faced with the worst of the worst, people and nations from all over the world can come together to support a goal; peace.