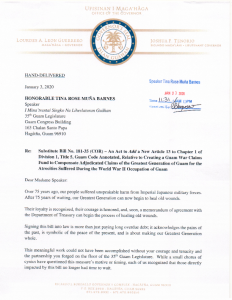 After more than 75 years of waiting for Guam’s manåmko’ and about six months of bickering between the congressman, the governor and the legislature over rival measures, a war reparations bill has been signed into law.

“Signing this bill into law is more than just paying long overdue debts,” said the governor. “It acknowledges the pains of the past. It’s symbolic of the peace of the present. And it’s about making our greatest generation whole.”

This is actually the second war reparations measure to become law.

The rival federal legislation proposed by Guam Congressman Michael San Nicolas still languishes in the U.S. Senate. But its passage remains necessary in order for the local version to fulfill its promise.

Bill 181 was not approved without opposition.  The original version introduced in July was revised, lifting the funding cap and leaving the source of funds obscure.

The opposition to the way the bill was passed without debate was bipartisan.

Republican and Democratic senators rose to object to the way the revised version was put to a vote leaving many questions unanswered.

“We need to make sure that every manåmko’ who’s filed a claim and their case is adjudicated that they receive the compensation that they rightfully deserve,” said the Speaker.

“When I look at your faces here, I remember my grandmother, my grandparents who shared their stories of the war with me,” said Sen. Shelton.

“I told the Speaker no matter what, I’m gonna vote yes. I don’t care what anybody says because it’s about you folks,” said San Agustin gesturing to the manåmko’ in the room.

Now that the bill has been signed, the hard work begins. A Memorandum of Understanding has yet to be reached with the U.S. Treasury Department to allow for the release to GovGuam of the names of war survivors who have won claims.

The governor told reporters after the signing ceremony that she “just got off a call with the U.S. Treasury” and “they are reviewing” the MOU. She expressed confidence that they would approve it by next week.

Leon Guerrero said that about $14 million in local funds is available and Treasury has another $23 million in Guam’s own Section 30 funds tied up waiting to be released once they have the legal authorization to do so.

“I’m targeting the end of January to issue the first check,” said the governor.