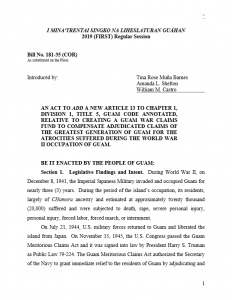 Late Wednesday afternoon Guam lawmakers moved a revised version of the Speaker’s War Claims bill to the voting file by a vote of 9 to 5. Senator Mary Torres had an excused absence.

The revised bill was advanced without debate.

“It is quite disappointing that the majority opted to ramrod Bill 181-35 straight into the voting file, without giving the measure a fair opportunity of discussion on the legislative floor,” said Sen. James Moylan in a statement following the vote.

“I support the intent of Bill 181,” said Sen. Telo Taitague in her release, “however this Bill is supposed to help our war survivors and to disrespect them is a disgrace to our greatest generation, that they are not important enough. This is truly a sad moment for the people of Guam as Speaker Barnes and Rules Chair Lee failed to ensure transparency with Bill 181.”

Guam Delegate Michael San Nicolas had asked Guam lawmakers to postpone action on the bill until his own war claims correction bill passed in the U.S. Senate.

He has expressed concern that a rival war claims measure at the local level might interfere with the eventual passage of H.R. 1365 by the U.S. Senate.

“The substitute Bill 181 is very vague,” said the Congressman in a statement sent to the Pacific News Center. “The Government of Guam doesn’t have enough money to pay everyone, and there is no statutory authority for the Government of Guam to create a legally binding process to pay claimants. I just hope that this action doesn’t compromise H.R. 1365 at the finish line.”

Chirag Bhojwani, policy adviser to Speaker Barnes, said that the debate on Bill 181 occurred in August when the original version of Bill 181 was discussed by lawmakers during a meeting of the Committee of the Whole.

However, no debate took place on the revised version which was just introduced Wednesday.

The revised version lifts the $7.5 million spending cap originally set on the payment of war claims.

Under the revised version, on the day that Bill 181 is passed by the Guam Legislature, all claims that have been adjudicated by the Justice Department’s Foreign Claims Settlement Commission will be paid out by the Government of Guam.

The number of adjudicated claims was about 750 earlier this year. The number may now have risen to 1,000 or more.

Bill 181 has not yet been put to a final vote. It has only been moved to the voting file.

“They did not pass out a copy of the bill showing the changes made during committee of the whole in a prior session.

“It is quite disappointing that the majority opted to ram rod Bill 181-35 straight in to the voting file, without giving the measure a fair opportunity of discussion on the legislative floor.

We get it, whoever has the votes controls the direction, but on an important matter such as the decision of utilizing general fund dollars to pay out approved war claims, many questions needed to be answered.  Are there any funds to pay these claims, or is this an empty promise where a bounced check will be paid out?  The governor claims there is no surplus, or was that surplus being reserved for this measure?  What is the update on the War Claims bill in the Senate?  Did the bill sponsors reach out to the Congressman to seek updates?  We have so many unanswered questions that may never be answered, and a bill that will now pass based on emotion versus logic.

Bill 181 was substituted with material changes, and yet senators were not afforded the opportunity to question or discuss these changes.  Where is the transparency?  Where is the responsibility?

While this is indeed a critical issue, and one that needs to be prioritized, pushing legislation without presenting the facts is irresponsible. We get it, it is the holidays and a season of giving, but when it comes to taxpayer dollars, we need to ask the hard questions before just “giving it away.”

I don’t disagree with the need to pay these claims, but I am very disappointed in the manner that this measure was expeditiously moved to the third reading file. Considering that no Committee on Rules meeting was conducted or agenda provided prior to session, I question the actions by a majority and it is unfortunate that transparency was not afforded to the people of Guam today.”