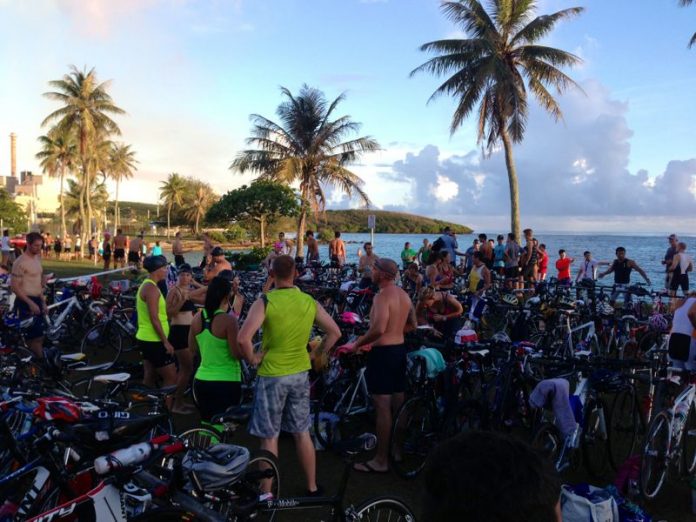 Piti, Guam – The Guam Triathlon Federation (“GTF”) saw 152 participants and a record for a sprint distance triathlon on Guam, many of them first time triathletes, compete in the first of two sprint distance series races early Sunday morning at Hoover Park in Piti.

The 750 meter swim, 20 kilometer bike and 5k run would see some of Guam’s best triathletes go head to head in a tightly contested race.

Not far behind Lombard was the second overall finisher, standout runner Charlie Epperson.  Epperson would finish less than 30 seconds behind Lombard’s finishing time of 1 hour and 2 minutes (unofficial), nearly catching Lombard at the end of the race with a blistering 5k run pace well below 6 minutes per mile.

Rounding out the top three in the men’s division was Ironman World Championship qualifier Cameron O’neal, who battled back and forth for second place position with Epperson during the bike leg of the race.

“We came out of transition on the bike and Charlie took off like a rocket,” an exhausted O’neal said after the race.

Riding strong with Epperson and O’neal for most of the 20k bike leg was XTERRA professional triathlete Carey, who was the sixth overall finisher and first female.  Following Carey was strong swimmer Sara Haack and female GTF National Champion Aysha Perez in second and third, respectively.

“It’s a PR for me in a sprint, that’s always the goal,” said Lombard after the race.  “At the turn around on the run I saw Charlie flying, it definitely pushed me to the finish.”

“It’s great to see all the first time participants, we had a great turn out today,” he added.

The combination of a swim and bike by Patrick Camacho and run from Justin Nieves would see them take first place honors in the relay division.

“We’d like to thank all the participants and volunteers for coming out and making this a great, safe race today,” said GTF President Mark Cruz.  “We hope to see everyone at the second race on the 23rd.”

The race series is serving as a fundraiser for the GTF National Team’s upcoming Pacific Islands Triathlon Championship this August in Papua New Guinea.