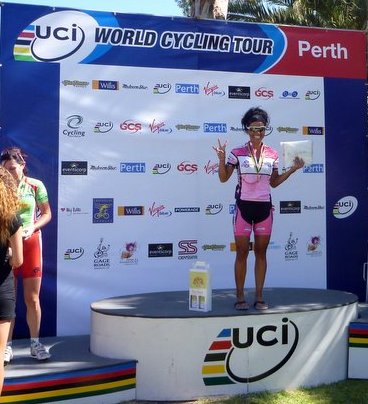 Guam – Guam’s cycling and triathlon standout Chiyo Lombard competed in a UCI World Cycling Tour 2011 qualifying event in Perth Australia over the weekend.  Finishing first in her age group in both the 12 mile individual time trial event and the 70 mile circuit road race qualifies Lombard to compete in cycling’s prestigious world championship to be held in Belgium this September testing her skills against some of cycling’s best riders while she vies for the world title.

Lombard was the second overall woman’s finisher in the individual time trial event.  The course followed the picturesque coastline of Rottnest Island and challenged the riders with windy conditions over the mostly flat course.  The road race challenged the riders with eight laps through Perth’s King Park with modest hills, tight turns and a packed, competitive field of 230 riders where Lombard placed 192 overall and was the 7th woman finisher despite dropping her chain on the last lap.

“I came down here to broaden my experience in cycling by racing in a more competitive environment.  Overall, I am happy with my results and can see areas that I need to improve on to be even more competitive” Lombard said.  “Of course, qualifying for the world championship event in Belgium is an honor but, right now I am focused on the South Pacific Games” she added.  Lombard is one of six tri-athletes who will be representing Guam in the 2011 South Pacific Games to be held in New Caledonia in late August of this year.

The Union Cycliste Internationale (UCI) is the world governing body for cycling. UCI sanctions World Championship events each year for all of the major disciplines of cycling.  The UCI World Cycling Tour (UWCT) is a series of events for amateur competitive cyclists.  Through qualifier events around the world, cyclists can obtain a place to participate in the UWCT Final, with a world title for the respective age group, as the ultimate goal.