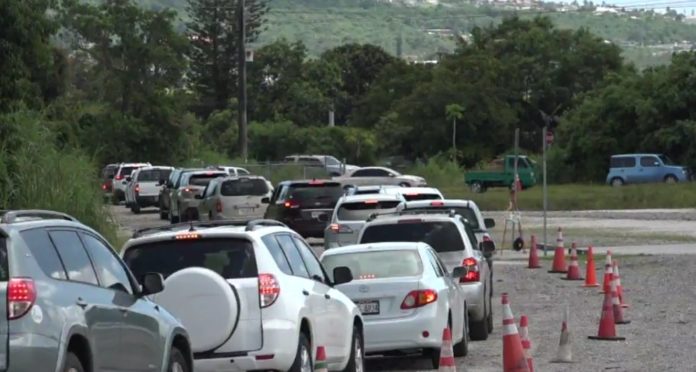 Long lines were seen at the Dededo Farmers Market today for the food commodities distribution program.

Stretching all the way to the Dededo Skate Park, as early as noon, cars were lining up to receive food commodities.

This is the first month that the Guam Department of Education is working with the village mayors for The Emergency Food Assistance Program (TEFAP). Earlier today, there were food distributions in Agana Heights.

In an interview with K57 this week, Dededo Mayor Melissa Savares said they are working with the Farmers Co-Op and the distributions are done at the open area of the flea market and that it’s a drive-through process.

Mayor Savares also mentioned that many of the Dededo recipients who called in for food commodities were those who worked in the hospitality and retail industries, who communicated with her and her staff their difficult circumstances.

Many of them say that they didn’t qualify for food stamps and have gone to the Salvation Army and other food banks to acquire some of their needs. Some added that although they are recipients of PUA, they have yet to receive their unemployment checks and had to rely on whatever savings they had left to pay for obligations and food.

The next set of food distributions will be at Agana Heights on Sept. 8. On Sept. 9, Mangilao, Sinajana, and Mongmong-Toto-Maite will follow.