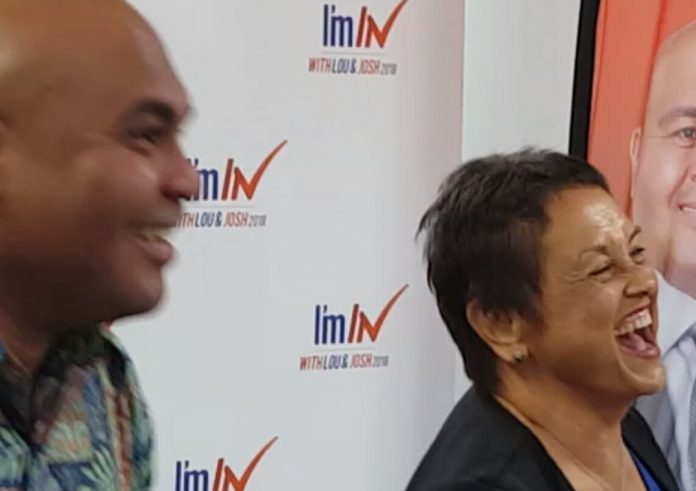 Guam – Democratic gubernatorial hopeful Lou Leon Guerrero and her running mate, Josh Tenorio, emerged to a packed house of supporters and generous applause at campaign headquarters to introduce their platform, Restoring Faith in Our Future: A Movement for Change.

The duo emphasized how critical it’s been to incorporate wide-ranging community input their master plan—from the living room to the boardroom. And one thing is crystal clear. This ticket’s top priority is getting Guam’s financial house in order with qualified expertise to create new industries and good-paying jobs while shoring up tax collection losses. They aim to venture several steps further than the Calvo-Tenorio Administration’s current tax amnesty program by forming a specialized, high-tech tax recovery unit.

Noting recent revelations of private sector entities not contributing their fair share to the treasury, Leon Guerrero said it’s criminal that people are allowed to do business in Guam without paying their business privilege taxes.

If fixing GovGuam’s books and optimizing the Dept. of Revenue and Taxation is priority number one, then hospital reform isn’t far behind. Leon Guerrero is a former nurse and former Guam Memorial Hospital board member with a passion for quality healthcare and a nagging itch to perform management triage on a hemorrhaging hospital.

“She’s cared for thousands of people on this island through good times and through bad times,” Tenorio said. “She used that experience to launch a career into politics and became one of the most successful senators in the Guam Legislature that has managed to increase the quality of life for our people and increase the healthcare coverage of people on Guam.”

But first things first. Noting the controversy and finger-pointing at GMH over allegations of corruption and mismanagement in an environment of strained resources that is threatening the loss of accreditation and Medicare funds, Leon Guerrero says she’s less worried about conducting an inquisition into management malpractice at Guam Memorial and more concerned about fixing things in a hurry.

“So let’s not dicker around with investigations,” she said. “Let’s first look at what we can do right now, right now, to provide the revenues, the resources, the funding, whatever that is, that is needed to make those corrective actions happen—let’s look at that.”

You can visit the following link to read the team’s new platform: http://www.louandjosh2018.com/press-release