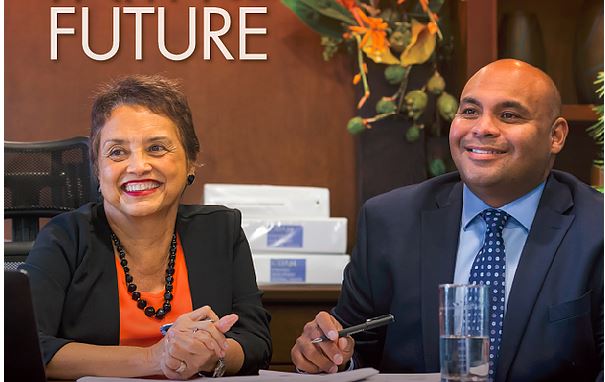 Guam – The Leon Guerrero-Tenorio Democratic gubernatorial team has accepted the Guam Election Commission’s decision to decline election-result challengers Aguon-Limtiaco their request to recount primary election ballots by hand. Aguon-Limtiaco asserts that a hand count will further ensure that all valid ballots were counted in the race.

Lou Leon Guerrero and her running mate Joshua Tenorio are the presumed winners of the Democratic governor’s race, after unofficial results from the Aug. 25 primary election put them just 260 votes ahead of Aguon-Limtiaco by Aug. 26. After a partial ballot recount on electronic tabulators last Saturday, Aguon-Limtiaco narrowed their vote deficit from 260 to 254 votes.

Sen. Frank Aguon and his running mate, former U.S. District Attorney for Guam and the CNMI and former Guam Attorney General Alicia Limtiaco stated in a press release issued Wednesday night that they are considering their options now that the GEC has declined their request for a hand count.  Meanwhile, two local nonprofit groups have staged a general election write-in campaign on behalf of Aguon-Limtiaco, and the gubernatorial team is, so far, endorsing it.

The following press statement was issued by Leon Guerrero-Tenorio on Wednesday night.

The Leon Guerrero-Tenorio campaign is, once again, pleased with the decisions made
by the Guam Election Commission in tonight’s meeting.

Since the end of the primary election, the campaign has respected the Aguon-Limtiaco
request to conduct a recount to ensure that the will of the People of Guam was heard
and counted. That has now happened twice and both times the Aguon-Limitaco team
remained behind by 250 votes or more.

In the meantime, a third-party organization that endorsed the Aguon-Limitaco team in
advance of the Primary, is organizing a write-in campaign on their behalf.
“We are grateful to Governor Gutierrez and Senator Rodriguez for joining us to unify
the Democratic Party,” says Lou Leon Guerrero, “and we will continue marching forward
with them to November because change is coming to Adelup.”