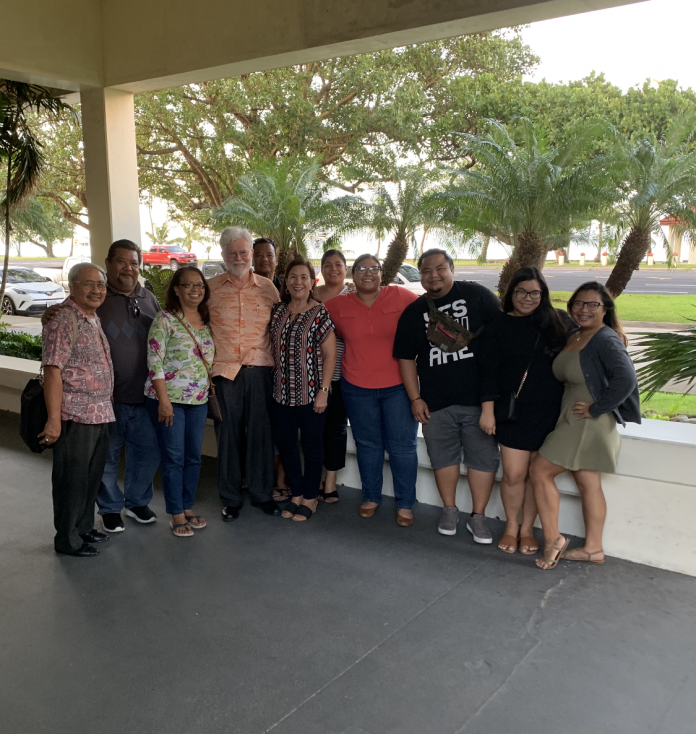 Cries of “Maga! Haga!” are likely to be heard in the halls of the Election Commission and in the homes and haunts of Lou & Josh supporters tonight, as commissioners  certified Guam’s general election early this evening. And now Guam will have its first ever woman governor.

“I am elated that the election season is now over and humbled by the confidence shown to Josh and I by the people of Guam, said Governor-elect Leon Guerrero. “We are honored to have prevailed in a very competitive field.”

“Tony and I thank all our supporters, families and all those who participated in the 2018 election,” Lt. Governor Ray Tenorio said in a concession statement. “We especially congratulate all those elected into offices and pray our Lord’s blessings on them and our island. I thank the people of Guam for the honor to have served them as their Lt. Governor the past eight years. We sincerely rally behind Lou and Josh now as we wish them the very best in their leadership to improve our people and their future. God bless Guam.”

It may have been a GovGuam Holiday on Friday, but the Guam Election Commission convened in the morning to count 292 absentee and provisional ballots that had kept two gubernatorial camps from conceding.

Prior to the count, the GEC discussed a variety of issues, including a complaint from former congressional candidate Jonathan Diaz who claimed that other candidates used campaign funds for other purposes than campaigning.

The Commission also discussed an election reform bill that outgoing Republican senator Fernando Esteves plans to introduce. The legislation would allow independent candidates to go straight to the general election. GEC Commissioner Kin Perez said write-ins and independents have caused unnecessary headache for the GEC during this election and urged the GEC to look into putting a third column on the ballot. With GEC’s plans to acquire new machines by the next election, GEC Executive Director, Maria Pangelinan said this will allow for a redesign of the ballots to include a third column.

The Election Commission will also be asking for a supplemental budget from the legislature to pay vendors and give raises to GEC staff. Meanwhile, Pangelinan says checks are ready for pickup for precinct officials who worked tirelessly to ensure a smooth election. While checks have been made available, less than half of all precinct officials have actually picked up their checks.

Now to the count, commissioners opened all mailed in absentee ballots as well as provisional ballots.

Based on a summary report that was run shortly before lunchtime on Friday, of the 292 absentee and provisional ballots, Lou Leon Guererro and running mate Joshua Tenorio received 175 votes, while the team of Tenorio/Ada received 68 votes. There were also 41 write-in votes. Based on that, GEC Executive Director Maria said there would be no gubernatorial runoff.

PNC also spoke with Independent Commissioner Pat Civille, who said commissioners had intended to continue counting until around six or or seven Friday night, and had hoped results would be certified by then. However, commissioners wrapped up before 5:15 p.m.

While the Democratic Party declared itself victorious in the gubernatorial race earlier this month, and the Leon Guererro-Tenorio team kept preparing for the transition from campaign to Adelup, the Tenorio-Ada team had refused to concede until after the results were certified. Tenorio-Ada in the General Election received 26.41% of valid votes cast on General Election Day. Based on the summary issued shortly before 1:00 p.m. Friday, Tenorio-Ada’s 68 votes chalked up to only 23.94% of the 284 viable votes, while Leon Guerrero Tenorio’s 175 votes made up 61.62 % of 284.

PNC has confirmed that Lt. Governor Ray Tenorio traveled off-island earlier this week. PNC had reached out to Adelup spokeswoman Oyaol Ngirarikl asking whether the Lt. Governor was planning to concede. Ngirarikl stated she would reach out to Tenorio. BOTA spokeswoman Tina Blaz said a statement was forthcoming, and it arrived just as the Election Commission was certifying the final vote count early Friday evening.

“Now that this election is behind us, the important work of our Transition Team continues,” said Governor-elect Leon Guerrero. “We are grateful to Governor Calvo and his Administration for their commitment to ensuring a smooth transition and look forward to our Transition Team’s report, which will provide us guidance as we assume Adelup. This has been a long campaign and I commend each candidate who responded to the important call to public service. I look forward to working with every member of the Guam Legislature as we address the many challenges ahead and respond to the needs of our people.”