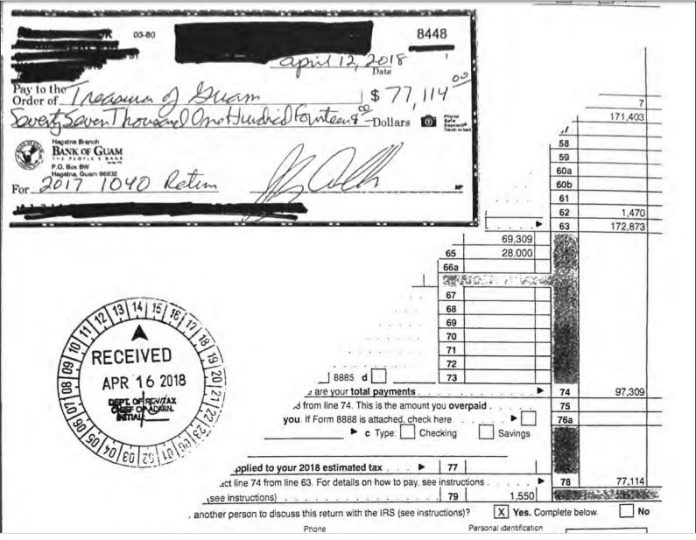 Note: this news article contains corrections from an earlier version of the story that was removed from our website.

Guam – In the interest of transparency, Democratic gubernatorial nominee Lou Leon Guerrero and her husband, Attorney Jeffrey Cook, released their most recent joint income tax return to PNC late Thursday afternoon. The couple paid a total of $174,423 to the Treasurer of Guam for tax year 2017.

Cook and Leon Guerrero reported combined total income of $625,782 for the year. After a standard deduction, their taxable income was $585,714. Total taxes on all income including wages and salaries, rents, interest, and dividends amounts to $172,873, but they also paid an estimated tax penalty of $1,550. To be clear, (1) according to the couple’s tax return, (2) according to the spoken-word confirmation of their tax preparer, and (3) according to Leon Guerrero herself, the couple prepaid $97,309 and paid a balance of $77,114 by the tax deadline.

The Leon Guerrero tax release follows PNC’s request for the return after Lt. Governor Ray Tenorio made his return public on Tuesday, revealing that he paid $6,371 in taxes for calendar year 2017.

Tenorio, the Republican nominee for governor, challenged all other gubernatorial candidates to do the same when he shared his returns with Guam news media on Tuesday.

PNC caught  up with the candidate himself on the matter at Guam Visitors Bureau’s gubernatorial forum on Tuesday. According to recent GovGuam staffing patterns, Tenorio earns $85,000 in direct compensation for his pay as lieutenant governor, but including $3,350 in other income, was able to claim total cash compensation of only $62,538 due to his participation in a deferred compensation retirement plan.

“It’s something called a 457 account, which is a deferred compensation plan which goes to retirement. And so what happens is you defer. I’ve been using it for years. A certain amount of your money is taken off of your total for deferred compensation, so you’re not paying taxes. It reduces your taxable income.”

After itemized deductions and exemptions, Tenorio’s taxable income for the year was $41,722.

“I just wanted to be transparent about what we make, and I think there’s something to be said about transparency,” Tenorio told PNC outside the hotel ballroom straight after the forum, in which the lieutenant governor squared off against his rival Leon Guerrero, without either of their running mates participating.

“People see the realities of the money we make and where it comes from, and I think that people need to know that, because as a public servant…it should be clear what interest we do have and what we bring in — and that’s what I got.”

Just before the GVB forum, PNC asked to interview gubernatorial write-in candidate Sen. Frank Aguon Jr. (D) and his running mate, former U.S. Attorney Alicia Limtiaco, on whether they plan to share any tax returns with Pacific News Center, but PNC has yet to hear back from either candidate with a definitive answer. The Aguon-Limtiaco “Believe Team” attended the luncheon event but did not participate in the forum, since they are not official nominees of either party.

Tenorio, who filed separately from his spouse, said he’d have to get back to PNC on whether his wife would be releasing her tax return, as well. We asked the lieutenant governor which assets he had placed in his wife’s name before filing his 2017 taxes and he said, “nothing.”

PNC asked if the couple owned any real estate. “Yeah, but we’re not renting, we don’t have a lease, I have nothing,” Tenorio said. “The only thing I have is an income from the government of Guam.”