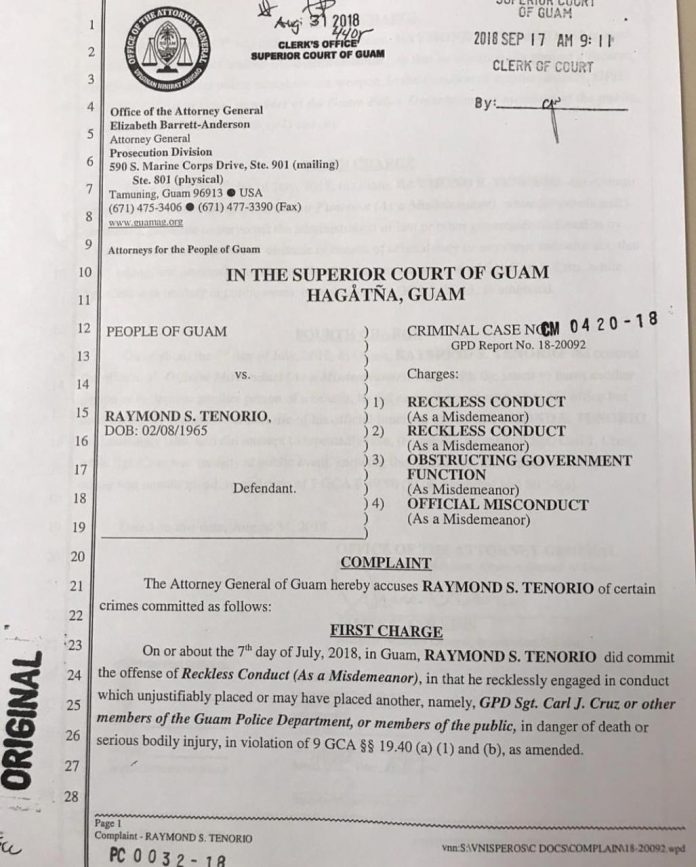 Guam – Lt. Governor Ray Tenorio has been charged in Superior Court with misdemeanors in relation to the infamous gun grabbing incident this past summer. He is now being summoned to appear in court next month.

Earlier today, court marshals paid the lt. governor a visit at his office but when they arrived, they found an empty office. Special Assistant Dong Choe, who was the only staffer to meet with the court marshals, was not very helpful, and could not affirmatively answer our questions about Tenorio’s whereabouts.

We later contacted Tenorio’s legal counsel, Attorney Tom Fisher, who confirmed that court marshals eventually caught up with the lt. governor and served him with a summons to appear in Superior Court.

We also obtained copies of the document charging the lt. governor with reckless conduct, obstructing government function and official misconduct. A declaration attached to the charging document reveals more details about the notorious gun grabbing incident.

According to court documents, at the July BBQ Block Party, Police Officer CJ Cruz was standing by the roadway in front of the Sand Castle when he felt someone tugging on his loaded firearm. The report notes that the firearm was “properly holstered at his side.” Officer Cruz immediately held on to the lower portion of his holster and turned around to elbow the perpetrator but was surprised when he saw it was the lt. governor who had been tugging at his loaded weapon.

However, according to court documents, Tenorio didn’t stop there, noting, “Lt. Governor Tenorio persisted. In a second attempt which immediately followed, the lt. gov reached and then depressed the release/retention button on officer Cruz’s holster and proceeded to lift his firearm out of it. Lt. governor then took hold of the gun with both hands and transferred it to his right hand and held it with his thumb and index finger at the lower portion of the receiver. In this orientation the lt. gov. held the firearm at eye level, dangling its barrel in the direction of officers who were sitting on the tailgate of the official police vehicle assigned to officer JF San Nicolas. According to officer Cruz, Lt. Governor Tenorio then stated ‘it’s that easy, it’s that easy! You know, I’m the public safety chairman.'”

Officer Cruz took his firearm back and noticed that “Lt. governor reeked of alcohol and that his face was red.”

Court papers note that Tenorio even went for a third try, insisting that it’s that easy to “take the gun away from officer Cruz.” On his fourth try, Officer Cruz grabbed Tenorio’s wrist, pushed him off and told him, “Roger, sir, roger, sir.”

Accoriding to the declaration, the lt. governor tried again and again and on the sixth and last attempt, Cruz pushed Tenorio with greater force, causing him to stumble. To that, Tenorio allegedly exclaimed, “Oh, it’s like that, it’s like that!”

Having had enough, Cruz replied “Yes, it’s like that!”

This account of the events that happened at the BBQ Block Party seem to contradict what the lt. governor explained to the public in an interview with PNC. Tenorio insisted that he had only consumed two to three beers and was not intoxicated at the time he grabbed the officer’s gun from his holster.

According to court documents, officers claimed Tenorio reeked of alcohol.

Tenorio has been summoned to appear in court on October 3 at 2 p.m. in front of Magistrate Judge Benjamin Sison. You can read details of the altercation here.

Late this afternoon, the lt. governor and the GOP released separate statements.

“I am 100% confident that the courts will find me completely innocent and reaffirm that my actions were in the interest of public safety. I will clear my name of this unfortunate politically-motivated attack but not before these baseless accusations have tarnished this election season. Meanwhile, I will continue to focus on helping Guam’s families recover from Typhoon Mangkhut. Tony Ada and I are moving forward to serve the people of Guam the next four years,” said Tenorio.

“The Summons of Complaint filed today with regards to Lieutenant Governor Ray Tenorio is an unfortunate situation. However, we have every confidence that the Lt. Governor will appear before the court and answer to the complaint appropriately. The Republican Party of Guam will have no further comments on the matter until the court issues a decision on the case,” the Republican Party said in their statement.