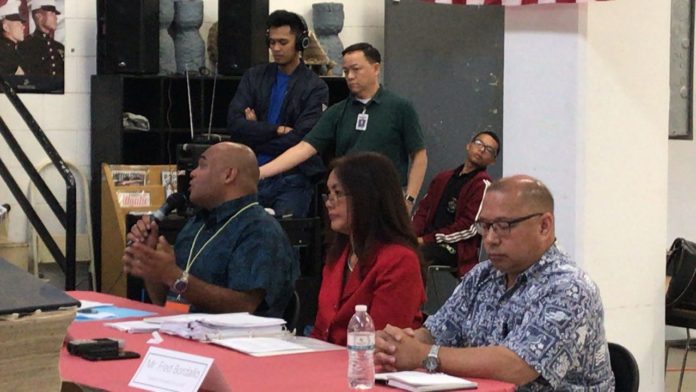 Guam – When Simon Sanchez High School students were asked who was registered to vote, about 40 hands went up.

The Student Government class sponsored a Lt. Gubernatorial Forum this morning and students heard from three of the five lieutenant gubernatorial candidates. Fielding the questions were Josh Tenorio, Alicia Limtiaco, and Fred Bordallo.

The candidates were asked a host of questions, from what their favorite food was at a fiesta to what their thoughts were on Bill 204, which calls for the construction/renovation of Simon Sanchez under a long term lease back, to how they’d deal with the current budget cuts and possible tax increase.

But it was a question from the audience that led to replies that were most relevant to the students.

“What do you think of our school right now? Is it good looking? Do we look happy?” asked student Emil Tamada.

Gubernatorial candidate Lou Leon Guerrero’s running mate, Josh Tenorio: “In fact when we were in one of the government rooms, I could see the outside between the wall and the ceiling. So like I said earlier, I think there are ways to get this done faster by holding someone accountable and empowering them to make the decision. And I think it is the superintendent, giving them the opportunity to get everything done early, and standing by the decision, and getting it done.”

Gubernatorial candidate Sen. Frank Aguon Jr.’s running mate, Alicia Limtiaco: “I have heard many of you testify and talk about … and that is that you live this every day and those of us that don’t go to school here, you’re absolutely right. We don’t live it and that is why we are wanting you to continue to advocate and pursue and hold people accountable for what is happening with our school system.”

Gubernatorial candidate former Gov. Carl Guttierez’s running mate, Fred Bordallo: “We understand that we need the leadership of an administration that Governor Gutierrez and I have been talking about; making sure we remove some of this bureaucratic and favoritism to move along these businesses fighting. And it’s pretty much people being favored to get some of these contracts and it’s unfair that the ones who suffer is Simon Sanchez.”

At the end of the forum, a straw poll was held among the students, who got to vote digitally on who their favorite candidate was. Of the three candidates present, Josh Tenorio came out on top.