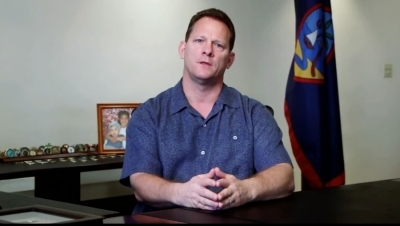 Tenorio went on to say that a war with North Korea “could doom this U.S. territory’s economy.”

Lt. Governor Ray Tenorio gave Breitbart news an exclusive interview in which he questioned the accuracy of the U.S.’s missile defense system against a North Korean attack.

Tenorio told Breitbart that there’s a “sort of checked optimism” with regards to the U.S. military’s ability to protect Guam from any potential missile attack from North Korea. He told the publication in part that residents of Guam need to have confidence in the U.S. military’s defense systems. “Because we have to.” However, he went on to talk about a recent missile defense test that was reported to be successful on only one out of four tries. He told Breitbart “And I’m saying ‘wait a minute, what do you mean missed? One out of four?”. Tenorio also told Breitbart that it would only take eight or nine minutes for a North Korean missile to hit Guam which “leaves little room for error.”

Tenorio went on to say that a war with North Korea “could doom this U.S. territory’s economy.”  The Lt. Governor says this is because of Guam’s heavy reliance on tourism as a major pillar of its economy. The Lt. Governor told Breitbart that a conflict in North Korea would give South Korean visitors and Japanese visitors “the jitters”. Japan and South Korea are the two largest visitor markets for Guam.  Tenorio’s chief of staff Joe Duenas on the other hand told Breitbart that the chance of North Korea hitting Guam is “.001 percent.”