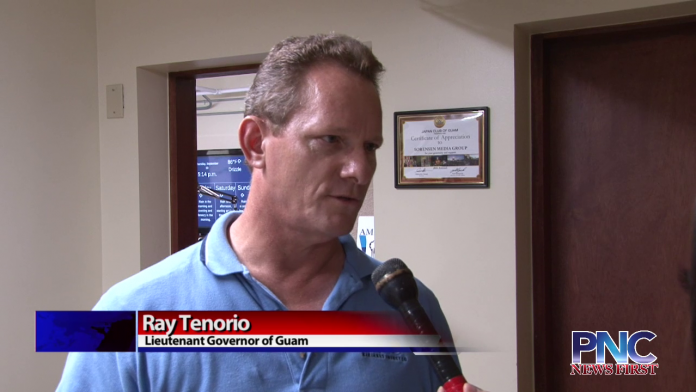 The lt. governor was caught on camera this morning around 11:30 at the parking lot of the old Citibank building in East Agana where he was seen meeting with court marshals. The images were sent to our newsroom and in it, Tenorio can then be seen entering a Lexus SUV.

Just three days earlier, on Monday, court marshals had already served the lt. governor with a summons to appear in court to answer to misdemeanor charges of official misconduct, reckless conduct and obstructing government functions for the infamous gun grabbing incident back in July.

We contacted Judiciary of Guam Spokesman Shawn Gumataotao who confirmed that the marshals had met with Tenorio to serve him with more papers. However, Gumataotao could not say what the lt. governor was served with. He did tell us that it is not uncommon for marshals to meet with individuals at locations like a parking lot to serve them with papers, calling it a “usual practice.”

Lt. Gov. Tenorio visited the Broadcast Centre Acanta today where PNC was able to confirm why he met with court marshals today. Tenorio says the documents he received were merely to inform him of two judge recusals in his case from Arthur Barcinas and Anita Sukola.

Lt. Governor Tenorio is schedule to appear in court on October 3rd at 2 pm for an arraignment hearing where he will plead guilty or not guilty to the charges against him.