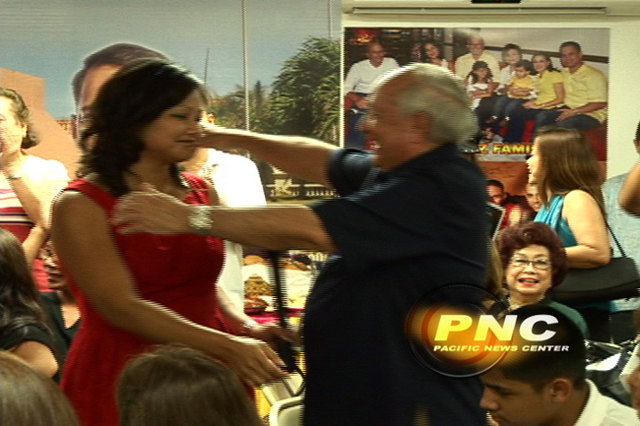 Guam – The wife of  GOP Lt. Governor Mike Cruz paid a visit to the Headquarters of the Democratic Gubernatorial team in Anigua Thursday night to give her support to former Governor Carl Gutierrez’s campaign.

A tearful Jennifer Cruz thanked the Gutierrez-Aguon camp for welcoming her to the fold and told the Gutierrez supporters “Not many people know what my relationship is with this family [referring to the Gutierrez family] , and I’m probably putting my neck out, but you know … I don’t care what anybody says.”

Referring to the Calvo-Tenorio team, Cruz said: “Throughout this campaign my husband and Jimmy [Espaldon] said  ‘You look into their eyes, look into their hearts. And you tell yourself … do you think that they’re the right people for Guam.”

“Now that my husband and Jimmy are no longer in the race,” she said, “I looked into the eyes and the hearts of the candidates and I say uncle Carl and Frank are the candidates for Guam.”

Before last Saturday’s Primary Election, Lt. Governor Mike Cruz and Senator Jim Espaldon both committed to a Unity Pledge  with their republican rivals Senator Eddie Calvo and Senator Ray Tenorio. Each team vowed to support the other, no matter who won the GOP primary. The pledge however did not include their wives.

Following the victory of the Calvo-Tenorio team Saturday, Espladon went to Calvo Headquarters to congratulate the pair on thier win. But Lt. Governor Cruz did not. And the Lt. Governor was also notable for his absence at Tuesday night’s GOP Fund Raiser where Republican National Committee Chairman Michael Steel spoke.

Wednesday, Senator Calvo told PNC News that Lt. Governor Cruz has been “working with us and of course what he wants us to do is to reach out to his people.” But Calvo would not say whether or not Cruz has personally pledged his endorsement to the Calvo-Tenorio team.

June 23, 2021
@PNCGUAM INSTAGRAM
Arrival protocols at airport being streamlined to