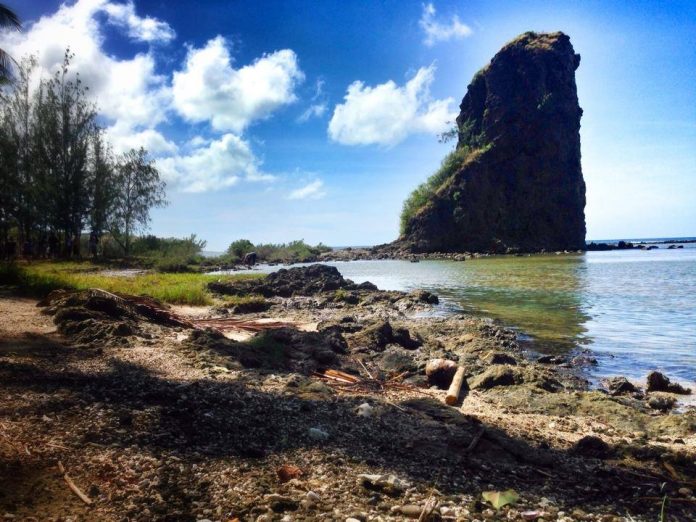 According to Chamorro Legend Fuha Rock is the Birthplace of Humankind

Guam – Nearly a hundred people showed up to the Lukao Fuha on Saturday.

The spiritual trek to Fuha rock is one that the Chamorro people practiced up until the colonial period. It was documented by various priests and explorers. According to the Chamorro creation legend Fuha rock is the birthplace of humankind.

“It’s amazing to see that we had about maybe a little bit over a 100 people which was unexpected last year we had about 70 it was nice and very intimate this year a little bit more so its good to be sharing this story broader to the whole island now,” said Joey Certeza of “Our Islands Are Sacred”. After meeting near the Umatac mayor’s office the group made their way down to Fuha rock. This spiritual procession to Fuha rock is something that the Chamorro people practiced for generations up until the colonial period.

“One of our main focuses of why we wanted to do a Lukao Fuha was to acknowledge our creation story because our island’s history is so rich that we also had our own creation story,” said Certeza. Fuha rock is a major part of that creation story. Although there are different versions of the story the main parts are that an ancient god named Chaife who lived in Sasalaguan created souls in a cauldron One day he made the fire too hot and there was an explosion and one of the souls escaped in the explosion landing as a rock in Fuha bay in Umatac. The rain softened the rock and turned it into the first man. That man then began making human figures out of red clay and the figures were then given souls or life by the sun. Eventually Chaife caught the soul that escaped and turned him back into Fuha rock.

“One of the things that we did focus on here for this particular lukao is that we wanted to build our people together, manhita, to be united we wanted to realize that we are all here as one, mangaffa family, and that we all have our own kind of energy, our kanna, that we also can contribute to the island and to future generations,” said Certeza.

The organizers want this procession to Fuha rock to be an annual trek. If you want to learn more about it you can go to Lukao Fuha dot com and you can also find them on facebook and instagram.