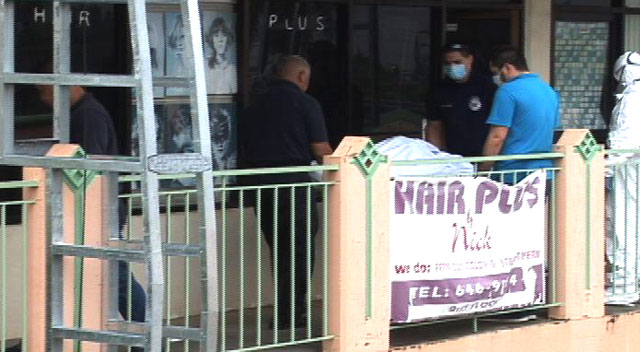 Guam – Medical Examiner Dr. Aurelio Espinola this afternoon completed an autopsy on the man found dead Sunday morning in a Tamuning hair salon and he told PNC News that “it was definitely a homicide.”

Dr. Espinola said that Teolentino died shortly before midnight Saturday, but he declined to say more.

His body was found Sunday morning, sprawled on the floor inside “Hair Plus by Nic”, a hair salon on the second floor of a 2 story building behind the burnt out Hafa Adai Exchange in Tamuning.

Billy Ray, the owner of the nearby Mai Thai restaurant, told PNC News the dead man was Nic Tolentino, the owner of  the “Hair Plus by Nic” salon.

Ray said he and his wife, Preeyanuch Jitlamu, heard a woman screaming about 10:30am. His wife went to find out what had happened and she encountered Nic’s daughter outside the door of the salon.

Ray says his wife looked inside the window of the shop and saw Nic on the floor, blood surroundings his legs. It appeared there had been a struggle he said because a shelf  had been pulled down and a broom lay across his body. They could not get inside because the door was locked. They called 911.

Ray said he had last seen Tolentino yesterday. He knew of no reason why someone would want to harm him, saying he was a “gregarious man, who was friendly with everyone.”

However Ray said that a group of young men had been drinking late into the night Saturday, across from the salon, on the sidewalk,  outside the abandoned portion of the Hafa Ada Exchange. But beyond the group of men drinking and talking, he said he neither saw or heard anything un-usual in the area.

Guam Police and Guam Medical Examiner Dr. Aurelio Espinola were on the scene by 11am.  Police dressed in white protective gear and went inside to examine the crime scene. The victim’s body was not removed until 3:30 Sunday afternoon.

Acting Guam Police Spokesman Officer Paul Tapao told reporters at the scene that a death investigation had been launched, but he declined to identify the victim or the circumstances of his death. [See Officer Tapao’s release below.] 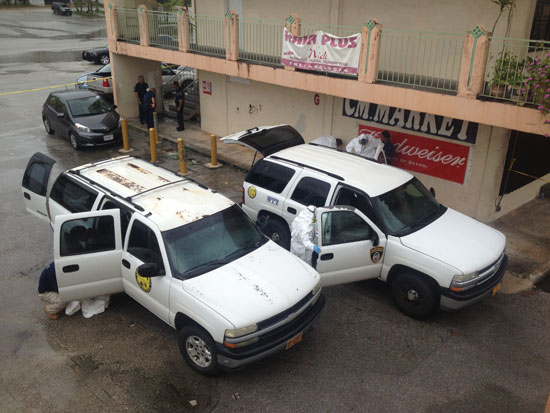 READ the release from Acting GPD Officer Paul Tapao below:

On July 27th at 10:25 a.m., officers from the Tumon/Tamuning Precinct Command responded to the HAIR PLUS by NICK Saloon, located on the second floor of the Hafa Adai Exchange, in Tamuning, relative to a Injured Person call.

Upon arrival, officers discovered a lifeless male within the establishment, prompting a DEATH INVESTIGATION.

the Guam Police Department’s Criminal Investigation Division was immediately activated, in which the scene has been released to CID agents, where the case is actively being investigated.

The case is being classified as a DEATH INVESTIGATION…