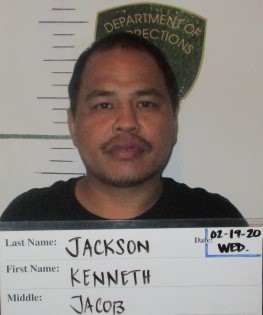 37-year-old Kenneth Jacob Jackson is accused of attempted murder and other felony offenses.

The allegations stem from an altercation at the victim’s Mangilao home about a potentially stolen bush cutter.

The victim told police it may have belonged to someone he knows.

That Wednesday morning, Jackson went to his truck and pulled out a machete and told the victim, “I’m gonna…kill you,” court documents stated.

The victim told police that he dodged Jackson’s attempt to stab him in the chest, but the altercation continued.

The victim called the police after he managed to flee the assault, telling police he feared for his life and believes that if he didn’t run away Jackson would have killed him.

Police noted “serious lacerations to both of the victim’s hands” and specified that the victim’s left hand was bleeding profusely.

There was also damage to a “no trespassing” sign on the victim’s property and to a PVC pipe the victim told police Jackson used to strike the sign.

Jackson admitted to police that he swung a machete at the victim during the altercation but denied cutting him.

He told police the injuries were caused by the victim falling, according to court documents.

Jackson was arrested and taken to the Dededo Precinct to be booked and confined.

The victim also present at the precinct told police, “we all know what happened; however, he will never admit to it.”

“Jackson then stated that the victim deserved what he had done to him,” states the complaint.

The Office of the Attorney General charged Jackson with attempted murder as a first-degree felony; aggravated assault as a second-degree felony and terrorizing.

Each offense carries the special allegation of use of a deadly weapon in the commission of a felony.