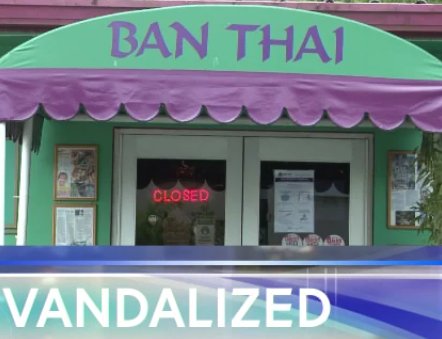 Two statues at the Ban Thai restaurant in Tumon that were brought in to celebrate the restaurant’s 20th anniversary were vandalized yesterday.

Since opening the restaurant back in 2000, Waen Trombetta — also known as “Mama Lek” — wanted to commemorate the occasion by bringing something special from her home country of Thailand. The Sawadee statues were meant to be a symbol of happiness and welcome customers to the restaurant.

Unfortunately, the statues were not greeted the same way.

Greg Kosanke, the longtime partner of the owner, said: “Both of them had been pushed over. One had been set back up again and the heads on both were gone, were knocked off. We don’t know if it happened separately or when they fell and one of the heads was missing.”

Waen Trombetta added: “Oh you know, this restaurant means everything to me. I’ve been working hard for 20 years. I just want to make everyone happy and see and enjoy my 20 years, you know, anniversary.”

The headpiece of one of the statues was returned on the doorstep of the restaurant the next morning. Though authorities have been contacted, the owner’s main concern is that it does not happen again.