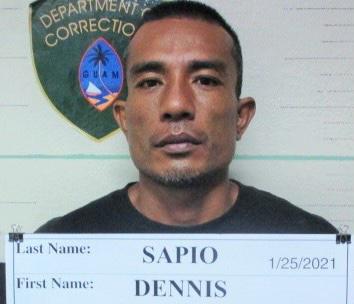 The Guam Police Department has arrested a 38-year-old man for two counts of family violence, aggravated assault, among other charges.

Police say that earlier this month, their officers responded to a complaint at a residence in Mongmong-Toto-Maite.

The victim told police that her husband Dennis Sapio started arguing with her and slapped her mouth around 10 a.m., on Tuesday, January 12.

She also told officers that Sapio started punching and kicking her head multiple times, while struggling to guard her face with both arms.

The victim also reported that he slapped her 5-year-old son in the face and kicked him.

She added that she tried calling GPD, however, Sapio broke her phone and threatened to hit her again when she attempted to leave.

The victim said she waited and when Sapio went to drink water, she ran out of the house to the neighbors calling for help.

Furthermore, she told police that Sapio has been smoking “ice” for a while.

Officers noted swelling and bruising to the victim’s jaw, temple area, cheek, and top of her head.

Police also noted the top of the victim’s head was bleeding.