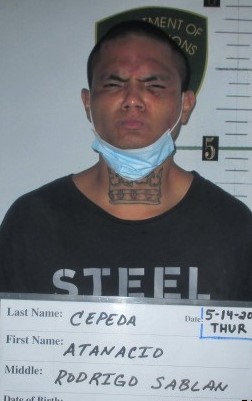 A man and his son were in fear for their lives when an unknown man entered their property wielding weapons.

Atanacio Rodrigo Cepeda walked into a Tamuning resident’s property speaking aggressively before pulling out a rebar and a 12-inch kitchen knife.

Police say that he made threatening gestures with the knife, scaring the father and son into the home where they called police for help.

The homeowner reported that Cepeda said “call the police, they’re not going to save you” and “I’m going to come back”.

When police arrived, they began searching for Cepeda. One of the officers reported that a rock was thrown from behind the home, landing about 8 feet from the officer.

Police discovered Cepeda hiding in the jungle and said Cepeda lunged at an officer.

An officer was injured during the struggle sustaining a cut to his left hand and right wrist area.

Cepeda was charged with terrorizing with the special allegation of use of a deadly weapon, assault on a peace officer, and resisting arrest.