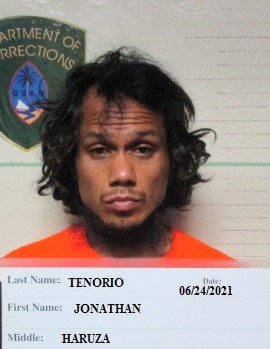 A man has been charged with sexual misconduct in a case involving a minor.

According to the magistrate’s report, on Wednesday, the Guam Police Department responded to a complaint in Dededo and met with an adult female who told the police that another female who is a minor was allegedly touched inappropriately by a male later identified as Jonathan Tenorio.

The victim stated that she was sleeping at around 7 a.m. when she felt someone forcibly remove her clothes, who she later identified as Tenorio. When the victim yelled for help from her brother, Tenorio allegedly left the residence without a word to anyone.

When interviewed by police, Tenorio admitted to being in the room when the victim was sleeping but denied making any sexual advances towards her.

According to the magistrate’s report, Tenorio is on pretrial release where he was previously charged with second-degree criminal sexual conduct where the victim was also a minor. Tenorio’s release conditions prohibited him from harassing, annoying, or molesting family members.

Tenorio has had a record with the Department of Corrections, with DOC records showing that as early as 2002, one of his former victims was also his wife.