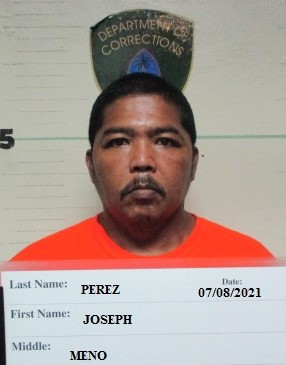 A man was arrested last week on charges of family violence, unlawful restraint, and harassment.

According to a magistrate’s complaint, the Guam Police Department responded to a report of an assault that occurred at a residence in Dededo. Police met with the victim who reported the details of the altercation between her and her boyfriend Joseph Meno Perez II.

The victim said that she and Perez got into an argument over her going outside to shower.

The report says that the argument escalated to the point that Perez allegedly hit the victim across the face.

The report says that the victim tried to leave in order to calm down, however, Perez took offense to that and then allegedly tackled the victim to the ground.

The victim told Perez that she wanted to leave, then Perez allegedly retrieved a machete and allegedly threatened the victim that he would cut off her legs.

The victim eventually was able to escape and ran to a neighbor’s home for safety.

When GPD officers attempted to restrain Perez, Perez allegedly challenged their knowledge of the law and said that he and the victim only had a “minor disagreement.”

While speaking with another officer later that day, police said Perez admitted to restraining the victim by sitting on top of her.

He also claimed that she had scratched his neck and choked him.

Officers did report that they noticed scratches and bruises around his neck.

The victim was also nursing her right shoulder and walking with a slight limp.

Based on the information given by police, the Attorney General’s Office says there is probable cause to charge Joseph Meno Perez II with family violence, unlawful restraint, and harassment.