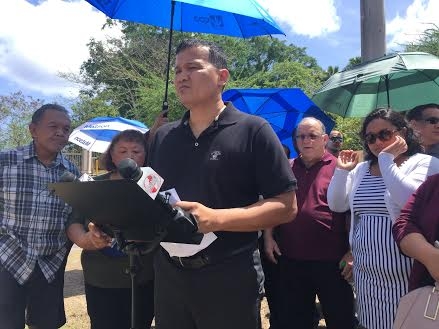 Flanked by attorney David Lujan and his family members Roy Taitague Quintanilla held a mini-press conference in front of the entrance to the Chancery office in Agana Heights.

Guam – A 52 year old man has stepped forward with a serious allegation saying that Archbishop Anthony Apuron molested him when he was 12 years old.

“My name is Roy Taitague Quintanilla. I was sexually abused by Anthony Sablan Apuron forty years ago,” said the alleged victim.

In front of a small podium at the entrance of the Archdiocese’s Chancery Office in Agana Heights Roy Taitague Quintanilla read from a letter he wrote directly to the Archbishop of Guam.

“Dear Archbishop Apuron. When I was twelve years old and an altar boy you molested me when you were the pastor of Agat. After a movie you drove all of the altar boys home. I was the last of the altar boys in the van. I thought you were going to take me home like the others but instead you asked if I could sleep at your house the priest house so I could help you at the church in the morning. You insisted I sleep in your bedroom even though I told you I wanted to sleep in the living room. I felt so uncomfortable being alone with you in your bedroom. Moments later I felt your hand squeeze my penis and testicles through my pants. I was trying my best to push your hand away it was painful. I used both hands and my legs to try and block you from touching me and squeezing my private parts because it was painful and extremely uncomfortable. I remember I didn’t sleep that night. I was too afraid to move because I thought you would do more things to me. I just curled up I cried then and I’ve never stopped crying,” said Quintanilla.

“I hope someday you will be sorry for what you did to me. I am still trying to forgive you. It’s been a long time since this tragic experience and it feels like it just happened yesterday. I want closure,” said Quintanilla adding, “I have been silent for 40 years. Mainly because I thought all this time I was your only victim and because I was embarrassed, humiliated, degraded and terribly confused about what to do. I thought if I said anything that people would not believe me or that people would retaliate against me for coming forward. Archbishop Apuron I will not be silent anymore,”

Quintanilla was surrounded by family members. “Is this someone that would come out and disrupt his life for a lie? I don’t think so. We were all raised as Catholics and the whole family is here to support him because we believe him,” said his sister Josephine Redmond.

“I’m here because I believe my brother and I’m gonna support him 100 percent. His character is impeccable,” said his brother Anthony Quintanilla.

“He is a good and decent man who would never lead us down a path of deceit or fabricated lies,” said his niece Charlene Santos-Bamba adding,  “This is not about creating divisiveness in the church or discord among Catholics nor is it an attack on the faithful. This is about bringing the truth to the fore and Roy spoke the truth today and we were all here to witness that.”

Last week the Archdiocese threatened to sue anyone who spread malicious lies about the Archbishop. “As we all know the Superior Court of Guam is right down the street you know he won’t break a sweat walking down there to file the complaint. I would be more than happy on behalf of my client to accept service of any complaint that the Archbishop files against Roy.”

Even if the allegations are true the statute of limitations has long since passed. So what does Quintanilla want out of all of this? “I want him to apologize for what he did to me. He’s never acknowledged me since that incident. I’m not sure that he even remembers me and I want other alleged victims to see what I did and to encourage them to come forward if they have something to say. That’s what I want,” said Quintanilla.

We applaud Roy T. Quintanilla, who today bravely stood and told his story of sexual abuse. It is always difficult for survivors to come forward and expose abusers, but when the accused predator is one of the most powerful people in a community, it takes herculean effort and strong support. By coming forward today, Roy has made Guam safer for children, exposed a horrific crime and decades-long cover-up, and began the journey towards healing, for himself and the Catholic community at large.

We encourage Catholics and the general public to talk openly about abuse and discuss sexual abuse with their children. We also ask that anyone who has seen or suspected abuse to come forward and report to law enforcement and civil authorities, not the church.

The time for Apuron’s petty threats and continued secrecy is over. We ask that Apuron immediately step down as bishop and that the archdiocese aggressively reach out to anyone who has been sexually abused by priests, employees or volunteers in the church. We also ask that the archdiocese work hand-in-hand with civil authorities and advocacy groups to expose all crimes that archdiocese officials and Apuron may have covered up.

We encourage Guam’s lawmakers to revisit civil window legislation and ensure that a new window law holds accountable third-party enablers who cover up and foster abuse. Similar laws in Minnesota, Hawaii, California, and Delaware uncovered vast conspiracies that allowed predators to continue to work with children far after church officials knew that the predator was a risk. Guam’s last civil window had no “teeth,” because victims could not expose the men and women who covered up abuse. Because of that, victims remained fearful and did not use the civil courts to expose their abusers. A new, more robust law can change that and expose abusers across the island.

Finally, we want to thank the Catholic community of Guam. They stood up to injustice and cover-up and created a safe environment for survivors like Roy to come forward and get healing. They are the true heart of the Catholic Church on Guam

(SNAP, the Survivors Network of those Abused by Priests, is the world’s oldest and largest support group for clergy abuse victims. SNAP was founded in 1988 and has more than 20,000 members. Despite the word “priest” in our title, we have members who were molested by religious figures of all denominations, including nuns, rabbis, bishops, and Protestant ministers. Our website is SNAPnetwork.org)