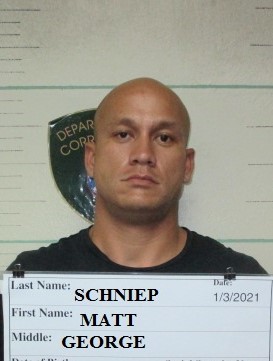 A woman who was allegedly strangled twice by her boyfriend told police that he has a bad temper.

This was the first serious argument between the victim and Matt Schniep, but it has left the victim fearing for her life.

A complaint filed against Schniep states that he became angry and threw the victim’s cell phone to the wall. When the victim asked why, instead of responding, Schniep allegedly grabbed her by the neck, pushed her onto the bed, and choked her.

The victim asked Schniep why he hurt her and was allegedly choked for a second time, with Schniep allegedly threatening to kill her. The victim could not say how long she was choked for but told police that she could not breathe.

The victim told police that she thinks Schneip would kill her because this was the most severe argument they have had.

Two witnesses reported that they heard the yelling and the victim questioning Schniep before hearing a banging noise.

Schniep was charged with one count of strangulation as a third-degree felony, terrorizing, family violence, and criminal mischief.

He was booked and confined at the Department of Corrections.