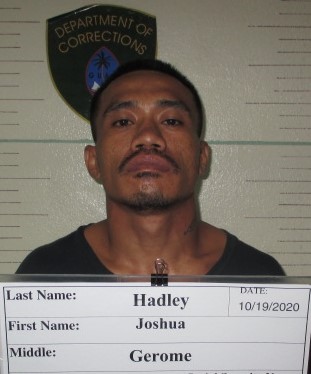 A man who appeared to be “high” allegedly threatened to kill his estranged girlfriend, telling her he was going to put her in her resting place.

The complaint was brought against Joshua Jerome Hadley, the ex-boyfriend of the victim. The two have six children together but do not live together.

According to court documents, Hadley let himself into the residence at around midnight on Oct. 19 after being told the day prior to leave and not return.

While inside the residence, he began arguing with the victim’s sister who told him to leave.

Instead of leaving, Hadley reportedly went outside and began tapping on the victim’s bedroom window.

“Through the window, victim saw that he had a rope around his neck and he said he was going to hang himself,” court documents stated.

Hadley walked away but later returned and again entered the residence.

According to police, he struck the victim on the neck with his elbow and allegedly threatened to kill her.

The victim told police that they continued to argue throughout the morning and he left after several members of the household told him too.

The statements were corroborated by the household’s family members, including one who told authorities that Hadley appeared to be “high.”

The Attorney General’s Office has charged him with burglary, family violence, harassment, and criminal trespass.