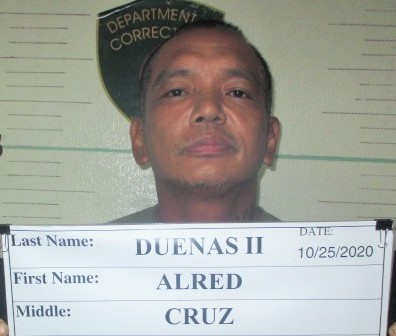 An altercation between two men over tires has landed one man behind bars for assault.

Police responded to a report of a disturbance in Mangilao on October 24. When police arrived, they witnessed Alfred Duenas II strike the victim in the face.

According to a complaint filed in the Superior Court of Guam, Duenas confronted the victim about retrieving tires of a vehicle.

The victim told police that he agreed to return the tires and told Duenas to meet him in Mangilao.

At some point, a vehicle chase ensued between Duenas and the victim who told police that during the pursuit Duenas struck his vehicle with a baseball bat. He also told police that Duenas hit him on the leg with the bat.

Police noted swelling to the victim’s left shin and his lip.

The bat was confiscated and Duenas was arrested on charges of aggravated assault and criminal mischief.