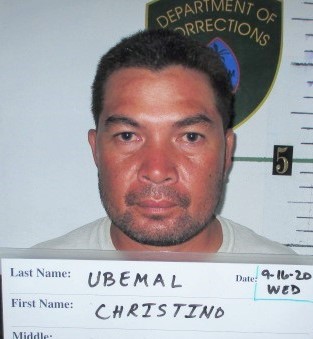 A car chase between Guam police and a man alleged to be driving under the influence, landed the 39-year-old driver behind bars.

On Wednesday around 12pm, police say that while on patrol in Talofofo, they saw a 2019 silver Mitsubishi Outlander stopped on N. Leonardo Tenorio Street.

When police approached the driver, they say he had bloodshot, watery eyes, his face was red and flushed, and they could smell a strong odor of alcohol.

Police identified him by a passport, as he did not have a Guam driver’s license. In their report, GPD officers say Ubemal appeared confused and his speech was heavily slurred. Police asked him if he would take the Standardized Field Sobriety Tests (“SFST”), to which he agreed.

Police say after he did not pass the SFST, Ubemal then agreed to a breath test which resulted in a 0.171 Blood Alcohol Concentration (BAC), above the legal 0.08 BAC.

When asked if he had anything to drink, Ubemal said that he drank two cans of beer.

However, in a later interview, he stated he actually had four beers. Additionally, police say that when Ubemal exited the vehicle, he had to hold onto the frame.