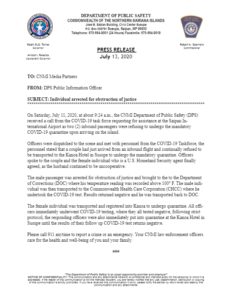 Commonwealth Public Safety officers were called to the Saipan airport Saturday morning after the CNMI’s COVID-19 Taskforce reported that a husband and wife who had just arrived were refusing to undergo the mandatory 14-day quarantine.

According to a release from the Department of Public Safety, when police arrived, the female passenger, who is a U.S. Homeland Security agent,  “finally agreed” and she was taken to the Kanoa Hotel in Susupe to undergo the mandatory quarantine.

However, her husband “continued to be uncooperative” and he was arrested for obstruction of justice and brought to the Department of Corrections.

At DOC, the man’s temperature reading was recorded above 100° F.  He was then taken to the Commonwealth Health Care Corporation where he was tested for COVID-19. The result was negative and he was taken back to DOC.

The husband and wife are not named and the news release does not say where they boarded their flight to Saipan.

The responding officers were immediately tested for COVID-19. They all initially tested negative.

However, in keeping with protocol, they too were placed in quarantine at the Kanoa Hotel until the results of their second, follow up COVID-19 test, come back negative as well.