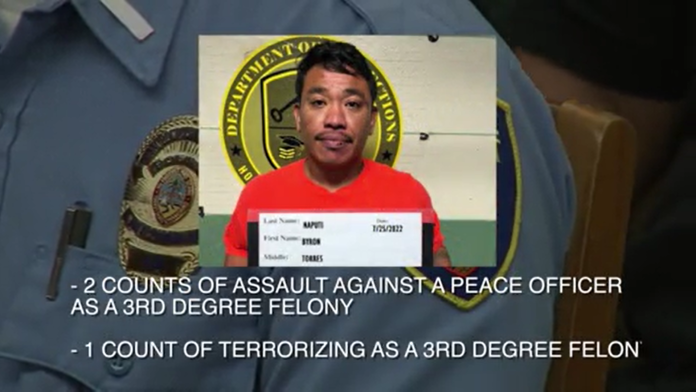 A man was arrested for allegedly assaulting 2 Police Officers.

And 1 count of terrorizing as a 3rd-degree felony.

On July 24th officers conducted a traffic stop on a 2019 Mitsubishi Mirage traveling southbound on Cruz Road in Agat.

According to Court Documents, During the traffic stop officers were led to believe that Naputi was under the influence of narcotics due to his demeanor.

The officer on scene recognized Naputi from previous encounters and instructed him to turn off the vehicle and told him he was under arrest.

According to court documents, naputi Refused leading the officer to reach inside and attempted to turn the car off.

While continuing to resist the officers’ attempted to remove him from the vehicle, he punched a second officer in the chest before being subdued.

According to court documents – Naputi issued the following threat, “when i see you outside i’m going to kill” before threatening to kill the two other officer’s on scene.