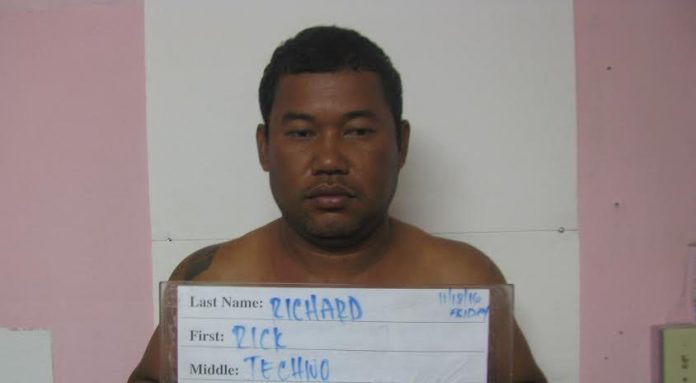 Police say Richard admitted to punching the victim two times with his right hand on the top of her head.

Guam – A man is behind bars after police say a woman reported that he beat her up for rejecting his sexual advances.

According to a magistrate’s report Rick Richard allegedly beat and possibly raped a woman in her car near Beach Bar and Grill. It all started at approximately 9:40 p.m. The victim told police that she was sleeping in her car at gun beach when she was awakened by Richard striking her. According to the report, the victim was already naked from the waist down and told police she believed Richard raped her while she was asleep. After the victim refused Richards sexual advances, she fled the vehicle and found refuge at the Beach Bar and Grill. Police later found Richard hiding in the jungle near the vehicle the victim stated she was in. According to police, Richard admitted that he and the victim drove to beach bar together and at around 9:30 p.m., while the victim was sleeping he digitally penetrated her. Police say Richard admitted to punching the victim two times with his right hand on the top of her head. Richard is charged with one count of third degree CSC as a second-degree felony and one count of fourth-degree CSC as a misdemeanor and one count of assault as a misdemeanor.