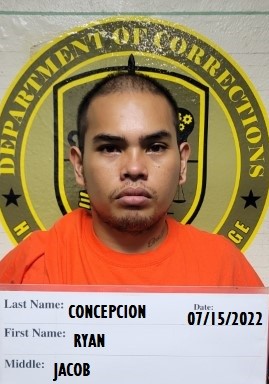 According to an official magistrate’s report – on July 15th – police responded to a residence in Dededo.

According to court documents – Concepcion had assaulted his mother – who was reported to be sick.

Concepcion had demanded money from his mother after she returned from her dialysis treatment.

When the mother told him that she did not have money, court documents said that Concepcion “slapped the left side of her face and pushed her on the chest which caused her to fall backward on the bed.”

Conception then took his mother’s cane and threw it at her, “striking her head on the right side.”

The mother told police that she was scared of her son, to the point that she could not sleep properly.

Moreover, the mother also admitted that “Concepcion had threatened to kill her multiple times in the past and she has not reported it.”

Court documents also report that Concepcion was responsible for a similar assault case that occurred on April 7, 2021.

Saying that Concepcion committed aggravated assault on a victim using a machete causing a laceration to the victim’s foot. Concepcion subsequently fled into the jungle before police could apprehend him.

According to the official magistrate’s report, prior to police arriving during the July incident, Concepcion fled to the jungle once again.

Court documents stated that Concepcion told officers that he was angry at his mother because “she did not give him enough money.”

Moreover, court documents also stated that Concepcion admitted to officers to using methamphetamines for 10 years and says that he “gets very angry” when he does not get the drug.

He also told officers that he “was trying to be a better person, but his parents never support him. Blaming his parents for his addiction to meth, arguing that he cannot quit using it because “they give him money.”

Concepcion is under orders by the court not to commit acts of family violence toward his mother.