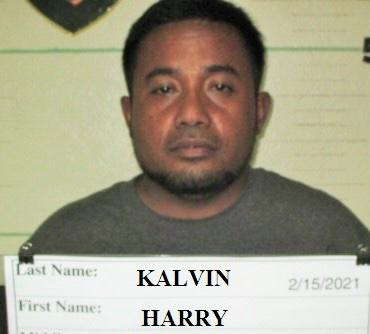 On Monday, February 15th, GPD responded to a harassment complaint at an apartment complex in Barrigada at around 3:30 p.m.

Police say that Kalvin told them he accidentally hurt his wife.

He indicated that he had been drinking and became upset and irritated upon the officers’ arrival.

He allegedly then told officers he swung a vehicle key to intentionally harm the victim.

Police had responded to a stabbing complaint at the same residence on February 10th at around 6 p.m.

Police say that upon their arrival, the victim approached officers with and injured bleeding right palm facing upwards.

The victim told police that Kalvin assaulted her with a knife.

According to court documents, the victim reported that Kalvin accused her of infidelity, which she denied, and he punched her repeatedly in the head and then attempted to cut her face.

The victim said he used her hands to guard her face, which caused the cut on her hand.

Court documents say there is a history of unreported assaults from Kalvin.