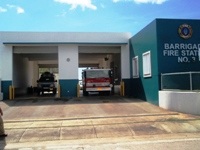 On Friday, August 14, 2020, officers assigned to the Central Precinct Command entertained a burglary to a vehicle complaint that occurred at the Guam Fire Department’s Station 3 in Barrigada.

Preliminary police reports suggest that during the morning hours, on-duty firefighters assigned to Station 3 discovered that an engine unit had been burglarized, with firefighting equipment and personal items taken.

During the course of the investigation, as officers were conducting an area check by the Barrigada Circle K Station, they noted 51-year-old Timothy Aquiningoc Funkugub, in possession with items that were listed stolen. A further scene check was made where other stolen items were located.

According to GPD spokesman Sgt. Paul Tapao, all items were processed and relinquished back to GFD.

Timothy Funkugub was later transported to the Central Precinct Command where he was arrested for the following offenses:

Timothy Funkugub was subsequently booked and confined at the Department of Corrections. This case has been forwarded to the Office of the Attorney General for prosecution.