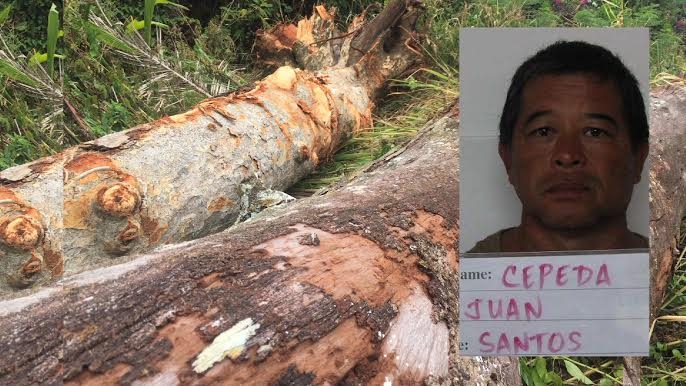 Juan Santos Cepeda was arrested and charged with aggregated theft of property, criminal mischief, official misconduct, and criminal trespass for entering private property owned by the Aguon family in Malojloj and cutting down two of their ifit trees.

Guam – A man has been arrested for trespassing and theft for cutting down two ifit trees on private property for GovGuam use for FESTPAC. DPW crews assisted with the venture which involved finding ifit wood for master carver Greg Pangelinan to make 27 ifit latte stones that will be presented to the nations that will be visiting Guam for FESTPAC.

Juan Santos Cepeda was arrested and charged with aggregated theft of property, criminal mischief, official misconduct, and criminal trespass for entering private property owned by the Aguon family in Malojloj and cutting down two of their ifit trees. Cepeda was there with a crew from DPW, some DPW equipment, and Pangelinan.

According to a magistrate’s report Cepeda had permission to harvest ifit trees on a piece of property owned by the Perez family but when he found there were only live trees on the Perez property he “wandered” into the Aguon’s property across the street. Cepeda then rerouted the DPW employees into the Aguon property and had them cut down two ifit trees. Mike Aguon then found them transporting the trees with a trailer and told them they were his trees and on his property.

Pangelinan called into Newstalk K57 this morning and spoke to host Phill Leon Guerrero saying they were not stealing the wood. “John Cepeda you know he is the caretaker for the Perez property and apparently John he mentioned that part of Perez properties is across the street which is probably, John don’t know about it it was an honest mistake,” said Pangelinan.

However the property is clearly on the other side of the street from the Perez property and in fact according to the magistrates complaint it is a quarter of a mile down the street. “And you said that Mr. Cepeda was told that the property across the street is also(Perez)?” asked Leon Guerrero. “According to him that he was told that on the other side of the road Perez still owns but he doesn’t know where it ends. The poor guy don’t know he was just a caretaker there,” said Pangelinan.

The magistrate’s report notes that he has been a caretaker of the Perez property since 1994 and was well aware of the boundaries of the various properties in the area. “Me you know if I see that there’s a sign there that says no trespassing I will not go in there. The chain was not locked you know the chain that was put on the pipe it was not locked at all and there is no sign whatsoever no trespassing,” said Pangelinan.

However the metal post that holds the chain was bent and in fact damage listed on the magistrates report includes the cost of the post estimated at $30 dollars.

Ultimately the wood was returned to the owner. “Then the owner he wants public works to bring the wood and bring it over to his house and that’s what they did,” said Pangelinan.

Ifit is an indigenous rare hardwood tree on Guam. It’s the official territorial tree of Guam and it’s wood is valuable because of it’s resistance to termites and other pests. According to the magistrates complaint the trees that were cut down were valued at a thousand dollars.