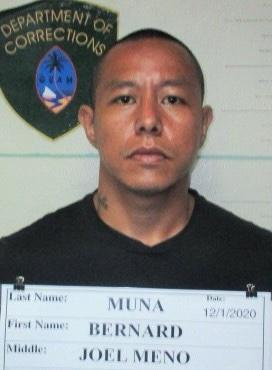 The Guam Police Department has arrested a 35-year-old man for family violence and criminal mischief.

According to court documents, GPD responded to a complaint of 2 vehicle windows damaged at a residence in Merizo, on Monday morning, Nov 30.

A neighbor told the person who filed the complaint that Bernard Joel Meno Muna was seen walking near the residence after demanding to use one of the vehicles.

The victim refused his demand.

At about 5 pm, Monday evening, police officers returned back to the Merizo residence, after the suspect became upset. He allegedly attacked the victim with a crowbar.

According to court documents, the victim was hit in the knee.

The suspect denied assaulting the victim with a crowbar. However, he allegedly admitted to damaging the cars.