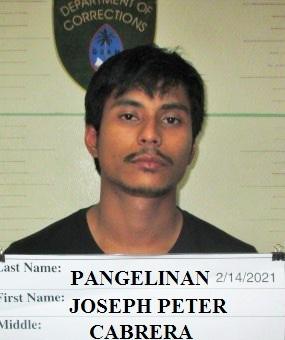 The Guam Police Department has arrested a 25-year-old man for electronic enticement of a child and harassment.

Police say that on December 9, 2020, Joseph Peter Cabrera Pangelinan sent a text message to a female minor asking her if she had seen a naked man, further telling her that he would be able to help her.

Pangelinan lived in the same residence as the victim at the time of the incident, court documents state.

Pangelinan allegedly asked the victim via text message to lay down with her, not to tell anyone, and also reminded her to erase the messages.

On many occasions, Pangelinan tried to get the victim to follow him to places with no one else, according to court documents.

The victim was fearful that Pangelinan would rape her, court documents state.

Pangelinan has been charged with harassment as a petty misdemeanor and electronic enticement of a child as a 3rd-degree felony.