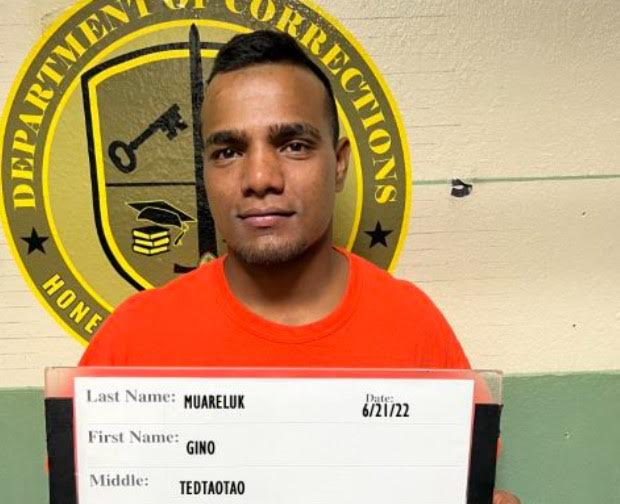 More on crime, Gino Tedtaotao Maureluk has been arrested for his involvement surrounding several violent occasions with different victims.

According to an official Magistrates Report – Maureluk faces charges of:

Family Violence and Assault, both as misdemeanors.

And 2 counts of Violation of a Court Order as a misdemeanor.

According to Court Documents, the earliest recorded incident of Maureluk’s crimes occurred in February of this year.

Police responded to a disturbance in Dededo where a male victim told police that he had been assaulted by three males, one of them being Maureluk.

Court documents state that police observed a substantial amount of blood running down the victim’s neck to which the victim claimed that it was Maureluk that struck him with a machete.

A second incident occurred earlier this month on June 12th, where police met with Maureluk’s ex-girlfriend.

According to the court report, the victim told police that Maureluk had been attempting to approach her despite a restraining order placed between them.

The victim told police that Maureluk threatened to hurt her if she continued to ignore him.

The final recorded incident occurred yesterday where police met with the defendant’s mother who was crying near a roadway in Dededo.

Another male approached the officers, claiming that Maureluk assaulted him while trying to protect Maureluk’s mother from Maureluk.

The defendant was then located and arrested.

This case is closed and has been forwarded to the Attorney General’s Office for Prosecution.