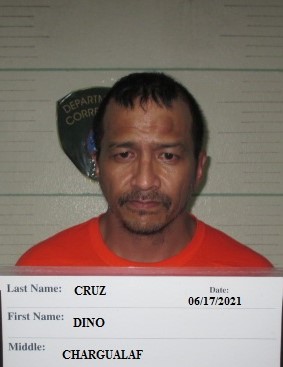 The man arrested for the shooting incident in Merizo Wednesday is a distant relative of the victim.

According to the magistrate’s report, the Guam Police Department arrested Dino Chargualaf Cruz, a distant relative of the victim, Jota Mata, who was shot in the leg.

Police interviewed Cruz who said that Mata is a distant relative and he allowed Mata to live with him in hopes that Cruz could be a positive influence for Mata to be a good person.

But Cruz said he started having issues with Mata and that Mata was making his life miserable. Cruz told police that a confrontation occurred between him and Mata after seeing Mata with a vehicle that Mata allegedly took from Cruz’s friend named Eli Ewing.

Cruz said a verbal argument ensued and he got a firearm, a Glock-22 .40 caliber, because Mata was bigger than him. Cruz stated to police that he told Mata to go back into the residence or he will shoot Mata. Cruz thought Mata would damage the vehicle.

According to Cruz, Mata ignored his warnings and continued walking towards the vehicle. Cruz told police that he aimed at Mata’s feet and fired only one shot because he did not want to kill Mata and that is why he shot lower than the thigh.

Cruz said he had stolen the firearm he used to shoot Mata from Danny Sanchez a few weeks ago and Danny was not aware of that. Police reported that the firearm was recovered and was registered to Daniel Sanchez Jr. since 2014. Police interviewed Danny
Sanchez who said he did not know the gun we missing.

Police interviewed also Eli Ewing who confirmed that Mata took his vehicle and that Ewing
was trying to recover his vehicle.

Mata was taken to Guam Memorial Hospital where he is in stable condition.