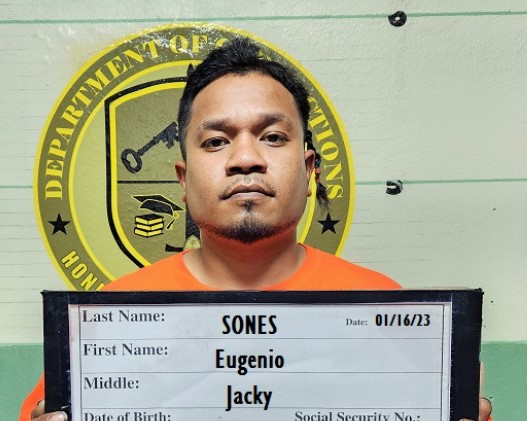 30-year-old Eugenio Jacky Sones is charged with two counts of 2nd-degree robbery via complicity as a 2nd-degree felony.

As PNC previously reported, on January 3rd, police interviewed a man named Km Reifich who said “during the robberies no one really had a plan” and that they would split the money after regarding a robbery that occurred at Kaela’s Mart in Dededo. According to the report, Reifich told police that Eugenio Sones was in another car after another robbery.

On December 2nd of last year, the Guam Police Department responded to the OK Fun Gameroom in Harmon where a female victim explained that two men, one armed and the other unarmed came into the game room – played for a couple of minutes, and then pointed a gun at her. She said the armed man went through the register and took about $2,000.

The report adds that police also arrested a man named Ryan Jay Cruz in relation to multiple other robberies. Police then learned that Cruz corroborated with Sones in robbing the game room.

As PNC previously reported, another incident occurred on October 29 of last year when GPD responded to a robbery in Kaela’s Mart in Dededo. Court documents add that the victim described the man to have a heavy build with a dark complexion and wearing a white baseball cap.

The man said obscenities asking for the money saying, “…or I am going to shoot you.” The victim gave the man $70 and he left with another man who held the door open.

In a police lineup, the victims identified Km Reifich as the suspect in the robbery. Sones denied taking part in the Kaela’s Mart robbery but did admit to being the lookout for Cruz during the game room robbery.