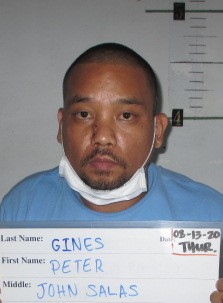 On Tuesday, August 11, 2020, officers assigned to the Central Precinct Command investigated a reckless driving complaint relative to motorcycles operating in a reckless manner in the Chalan Pago area, which resulted in one of the motorcycles crashing in Route 4 Chalan Kanton Tasi, Sinajana by McDonald’s.

Responding officers were able to locate and apprehend, 35-year-old Peter John Salas Gines, who was found in his possession, suspected drugs which later tested presumptive positive for methamphetamine and a loaded handgun.

All items were later confiscated.

Due to the injuries sustained from the crash, Gines was admitted to Guam Memorial Hospital with the case investigation forwarded to GPD’s Special Investigations Section for follow-up.

On Thursday, August 13, 2020, Gines was discharged from Guam Memorial Hospital and was met by SIS investigators. He was later arrested for the following offenses:

Gines was subsequently booked and confined at the Department of Corrections. According to GPD spokesman Sgt. Paul Tapao,  the case has already been forwarded to the Office of the Attorney General for prosecution.